Photographer Leland Bobbé is not interested in an over-the-top image. While he has focused his work on burlesque dancing, and now more recently, drag queens, he is not preoccupied with the conventional posturing of performance. Instead, Bobbé looks for vulnerability. As he said over tea in his Chelsea apartment, “I think you can look at a picture much longer if there’s some vulnerability.”

His “Half-Drag” series is officially comprised of 40 photos, curated from a finished 65 images and displayed on his website. As indicated by the project’s name, the images are of subjects half in drag, half without makeup. While the works are titled with the subject’s performance name, the dual reality of the face-only pictures speaks to a split identity, of which each side is equally true.

Bobbé began the project when one of his burlesque models came in completely divided from head to toe. He had his “male side” affixed with a beard and his “female side” with a false external breast implant, painted with a red nipple for the purposes of the expression.

As a photographer, Bobbé was fascinated by the line of the image and sought to continue the project, but the process was gradual. Some months later, he attended a photography event that featured his burlesque photos, where the servers at the event were drag queens. The servers encouraged him to work with them in his next photo series, but still the idea simmered.

Finally the concept emerged, raising important questions of posturing and gender. Of all the men in drag, only one identified himself as straight, with the specified contrast of expressive duality lending itself to societal discussion. After debuting the series with 25 photos on his website in June 2012, the project received recognition in Brazil and word quickly spread to thousands of other websites, then onto arts publications in Germany and finally The Huffington Post, ABC News, and Vogue Italia. By the peak of his press coverage that August, Bobbé was receiving 40,000 views weekly on his website, and had shown in 30 countries.

In addition to a steady stream of daily press requests, Bobbé received letters from around the country, including from teens inspired and empowered by his photography. The questions of gender identity, makeup artistry and simply striking photography motivated viewers on an international scale. The subtle and respectful lens Bobbé used to uncover the drag world is rare in a world of projected ostentation, and the vulnerable aspect serves as motivation to a quiet yet widespread insecure community.

Leland Bobbé has also been featured at the Museum of Sex and has won innumerable awards. His background in fashion and burlesque photography also led him to work with ad agencies who brought him corporate clients — he lists American Express, Citibank and Visa among his work experience. A native New Yorker with a career spanning three decades, Bobbé continues to live and create in the city.

The photographer reflects on his “Half-Drag” experience exceptionally fondly: “I don’t think I’ll ever shoot a project in my life that will get this much coverage,” he said. “And if I don’t, that’s fine … it’s changed my life.” 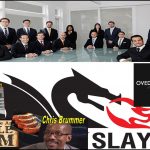