And now we have a story about an FBI agent dancing who dropped his firearm doing a back flip and shot a man in the leg.  How does this stuff keep happening with guns?  Ok, the agent was off-duty.  So good for him to be out having a good time.  But not so good to be having a good time without his gun secured.  I mean, who backflips while packing?  This g-man is the answer.  So far, we don’t know the agent’s name.  But if a gun falls, it can easily fire as it did here.  This all went down on the dance floor of a bar in Denver, Colorado.  But like it happens so much these days, this was all caught on video.  Everything we do in public now has a good chance of appearing on some kind of video.

Related: Woman Shoots Homeless Man Twice When He Asks Her to Move Her Porsche

The video appeared widely on Twitter, showing the FBI agent strutting his stuff on the dance floor.  Then he did a back flip, his gun flew out of its holster, hit the floor and fired, hitting another patron in the leg.  The agent tried to grab the gun as it fell but failed.  The screen shot clearly shows the gun firing on impact with the floor.  The injured man went to the hospital and was treated for what was fortunately a non-life-threatening injury.  So far, we don’t know the agent’s name, nor if he faces any disciplinary review.

DOING BACKFLIPS WITH A GUN A BAD IDEA, FBI AGENT MAY HAVE BEEN DRINKING

In the video you can see that the agent’s wild dancing caused an appreciative crowd to gather around at the Mile High Spirits and Distillery bar two weekends ago.  But the fun energy instantly changed when the gun discharged.  Everyone stood shocked as the FBI agent grabbed his gun, held his hands up and left the dance floor.

Denver Police said the agent “was dancing at a nightclub when his firearm became dislodged from its waistband holster and fell on to the floor. When the agent retrieved his handgun an unintended discharge occurred.”

There are lab test results that will show “if alcohol was a factor.” 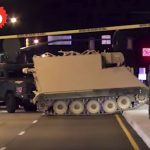 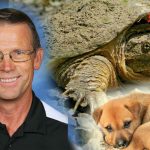