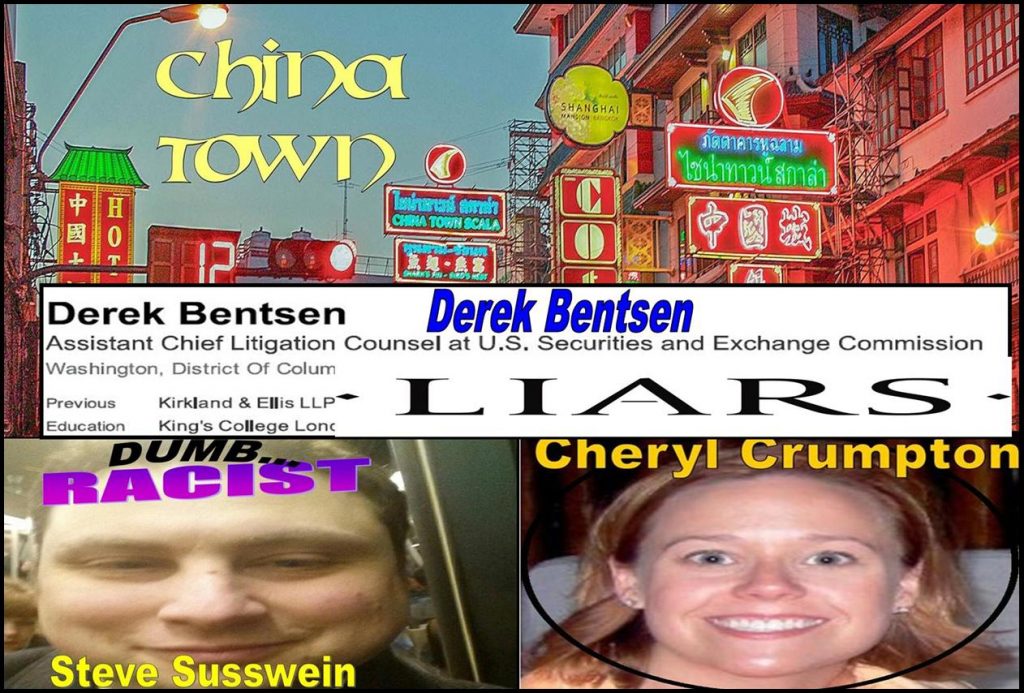 Reverse merger is a simple merger between a public company and a private business. Investopedia defines reverse merger as “a way for private companies to go public, typically through a simpler, shorter, and less expensive process.” The boring investment technique somehow has caused Derek Bentsens serious diarrhea. Waking up in the middle of a night, Derek Bentsen started barking at “reverse merger” as some devil’s tactic. In fact, ignorance and outright stupidity lie in the center of Derek Bentsen’s wild goose chase in Chinatown. 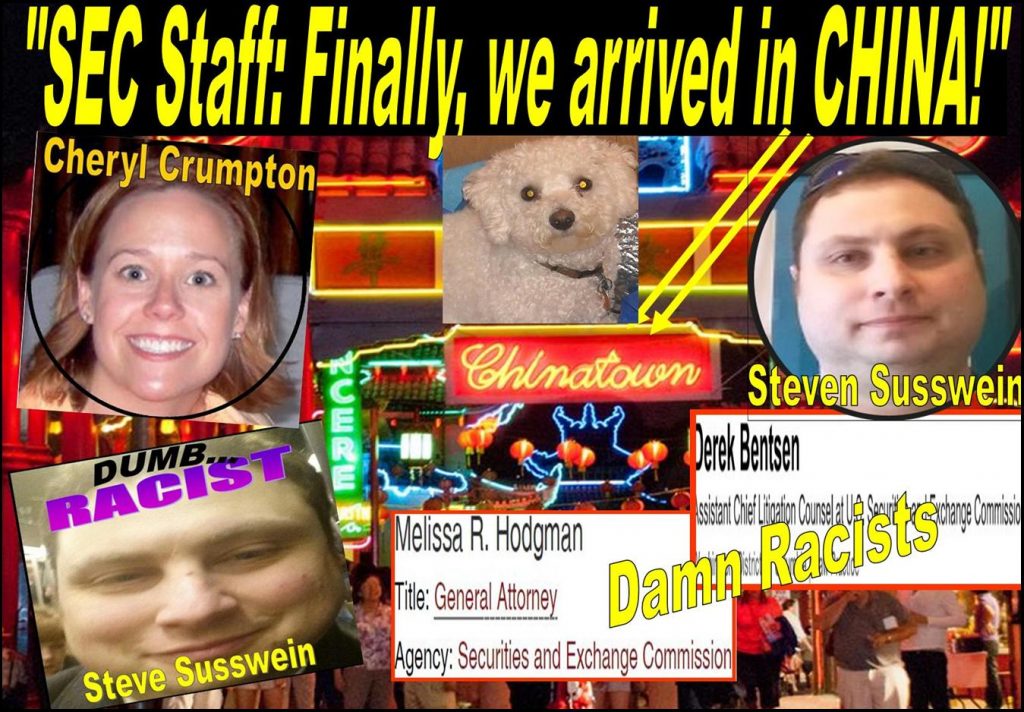 “We must drain the swamp and fire these very stupid people wasting our government’s resources, including at the SEC,” said Donald Trump. “Let’s #DrainTheSwamp.” Trump is right. At the bottom of a swam – deep in the mud, you may find the SEC lawyer Derek Bentsen gasping for air.

“… William Uchimoto and his co-defendants would convince the client companies to enter into “lock up” agreements that prevented the management from trading their shares for a period of time…This control allowed easily manipulate the market for those securities and profit from the scheme.” 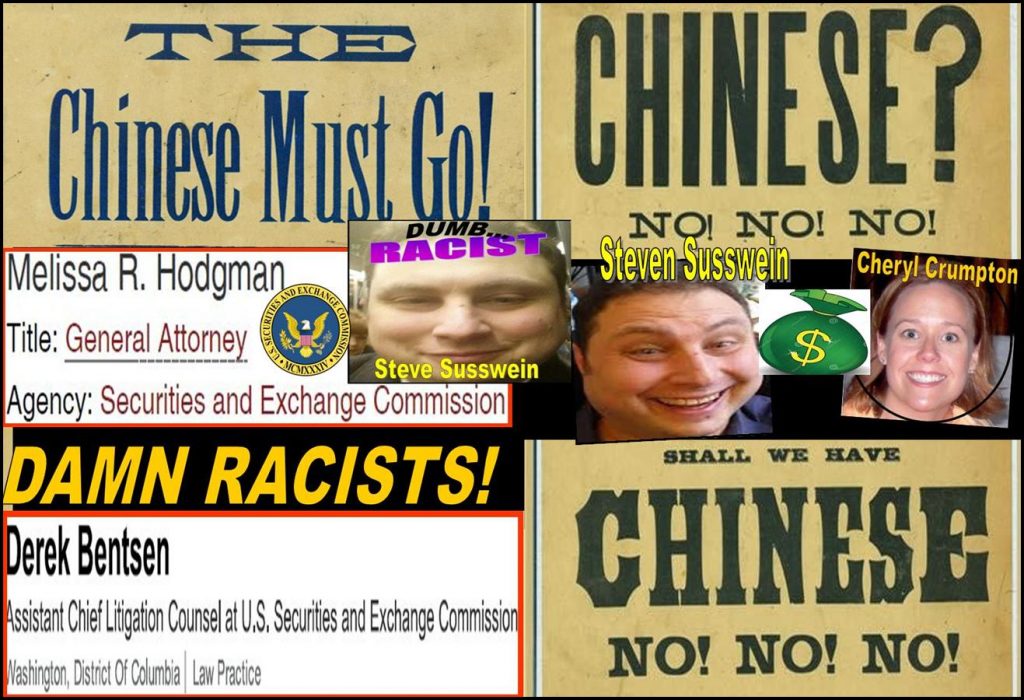 Derek Bentsen admits he has never been to China. He also concedes he doesn’t speak a phrase of Chinese beyond shouting “General Tao’s Chicken” off a Chinatown restaurant menu. Neither has Derek Bentsen done any business with China in his life. There was no witness or testimony from anyone. Then how in the world could Derek Bentsen possibly know what is legal or illegal about Chinese business practices? Never mind, Derek Bentsen thinks he knows a lot about China by roaming around DC’s Chinatown…

“Derek Bentsen is such an ignorant pile of shit,” said journalist Ronnie Chieng, a regular contributor to the Daily Show. “It’s time to expose this damn racist.” 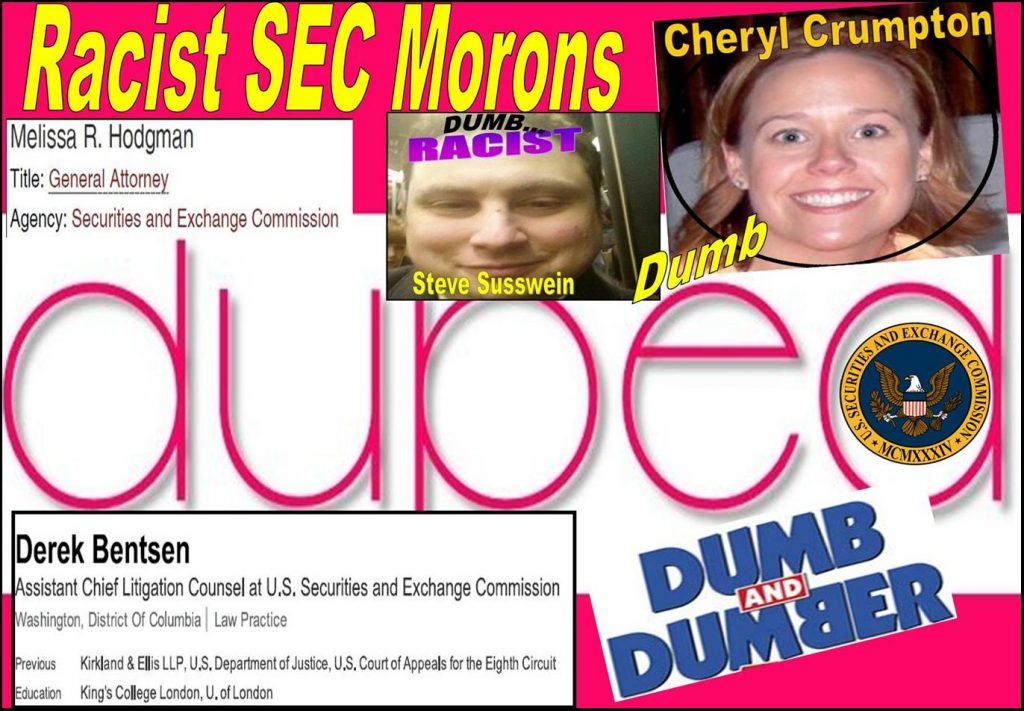 Under Chinese law, shares owned by founders/management are automatically “locked up,” prohibited from selling for at least 3 years from the time when their shares are listed on a stock exchange. This rule applies to China-based companies traded anywhere in the world since many of them have Chinese shareholders.

“The voluntary three-year “lock up” of Chinese founders’ shares is literally black letter Chinese law, which requires company insiders hold their shares for at least 3 years!” 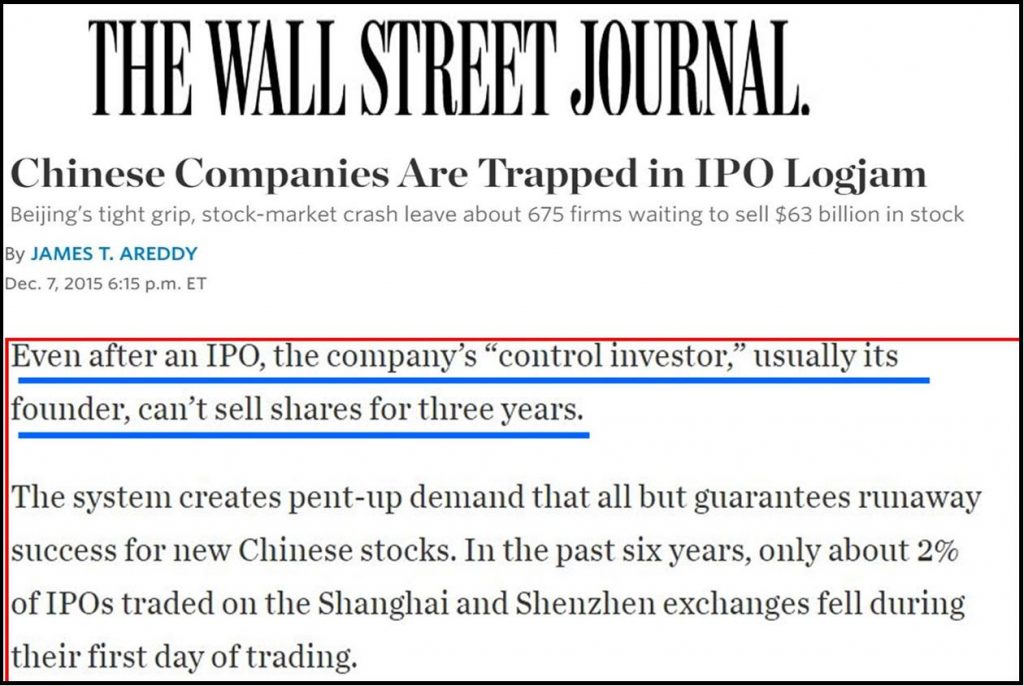 In the U.S, a similar requirement exists under the SEC’s own Rule 144 which demands insiders maintain a 2-year share lock-up. It’s the same concept. Somehow this normal business activity became “illegal activity” when China-based companies were involved. 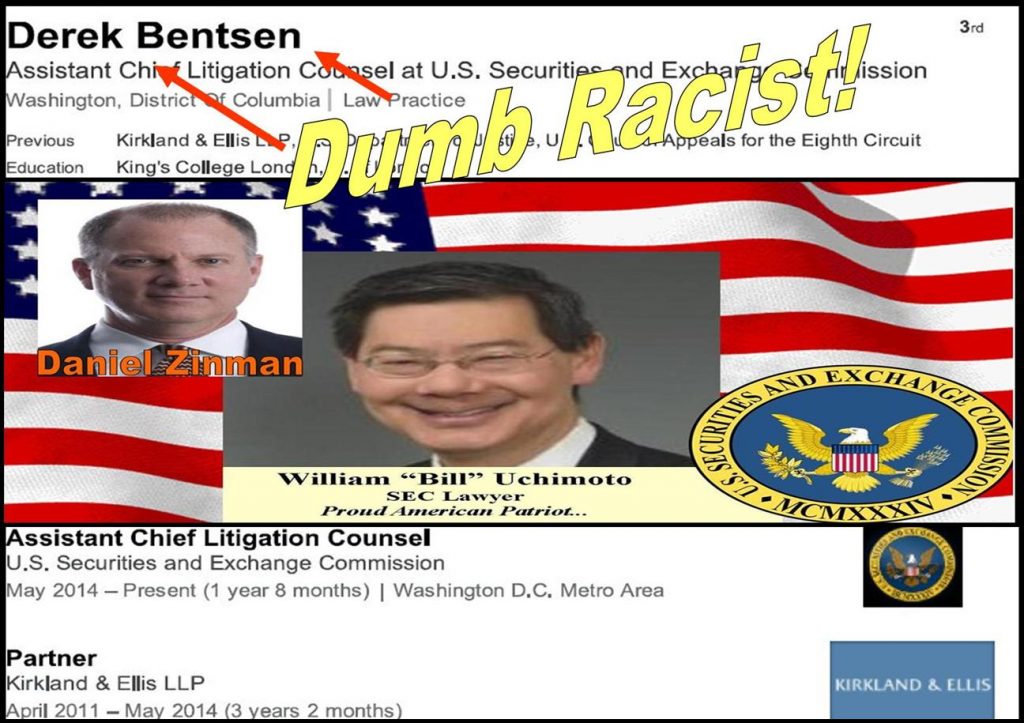 
How about the fact that far more Israeli-based reverse merger companies trade on U.S. stock exchanges than those from China? Derek Bentsen has never called them “Jewish reverse mergers.” But why not?

There is a term called Antisemitism against the Jewish people. Is Derek Bentsen attempting to invent a similar phrase that would continue the SEC’s racial discrimination against the Chinese? Pure racism? Yes.

The 3-year share lock-up requirement under the Chinese law is so basic, even someone with an IQ of 40 (the clinical definition of a retard) in China would know that. Well, apparently it was too complicated for the dumb SEC folks Derek Bentsen, Steven Susswein and Cheryl Crumpton – three imbeciles who have never stepped outside DC’s Chinatown. 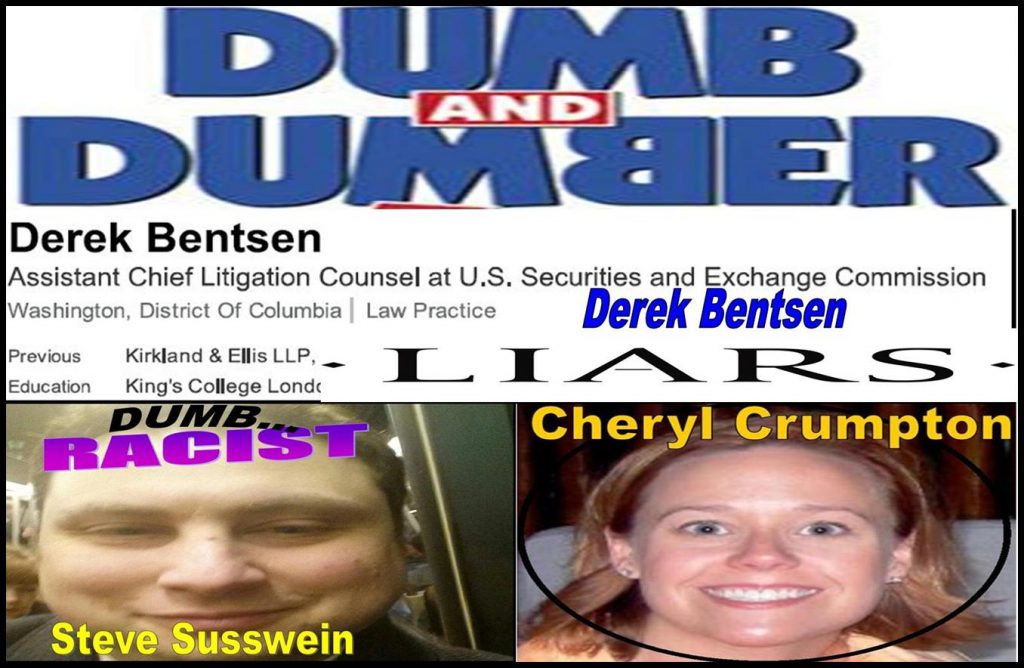 In addition to mandatory legal requirements, a Chinese company and its founders reap many benefits from entering into share lock-ups. These arrangements also come with extensive public disclosure: unanimous board approvals, independent auditor reviews, blessings from their lawyers, consent by major investors – signed by their senior management, and repeated disclosure in their SEC filings (if listed in the U.S.). Often, companies have successfully raised well over $100 million to expand their businesses and spend freely – directed by the same company founders/managers/board members themselves.

Japanese American lawyer William Uchimoto is furious over the SEC’s “fraud charge” against him:

“I think the SEC outright lied about the facts,” WILLIAM Uchimoto told reporters. “I got swept into something so they could have some Chinese scalps.” 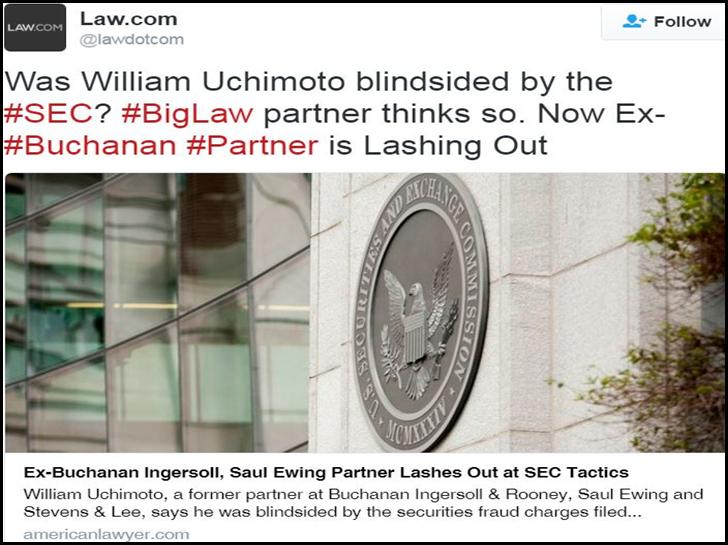 Is obeying the law somehow becoming “market manipulation?” For the imbecile SEC bureaucrats, common sense is just too much to bear.

Did this curious SEC lawyer Derek Bentsen ever bother to read a single Chinese law book before he choked himself in complete ignorance, humiliated himself in public filings with false allegations against the Chinese? Or is Derek Bentsen so shameless that he’s just happy being in existence as a true retard and a regulatory rapist? 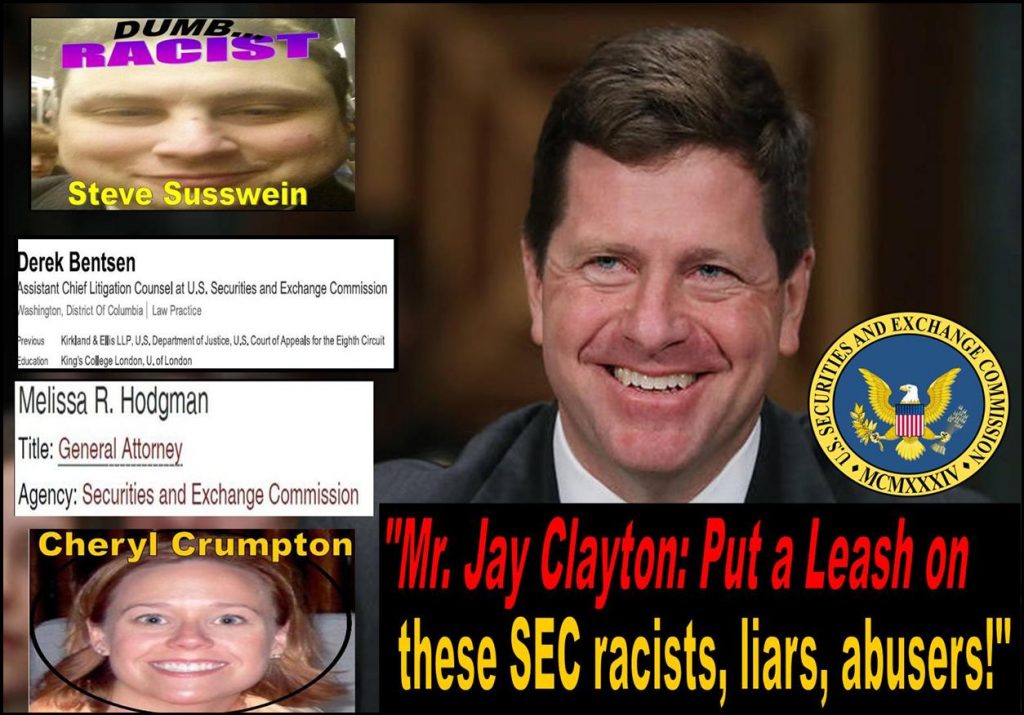 Until Donald Trump demands accountability and transparency from our government bureaucrats, Derek Bentsen and his cronies will be happy “laying eggs” at the bottom of a nasty swamp…

It’s time to #DrainTheSwamp and expose these regulatory rapists at the SEC. 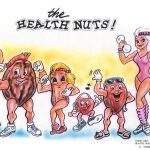