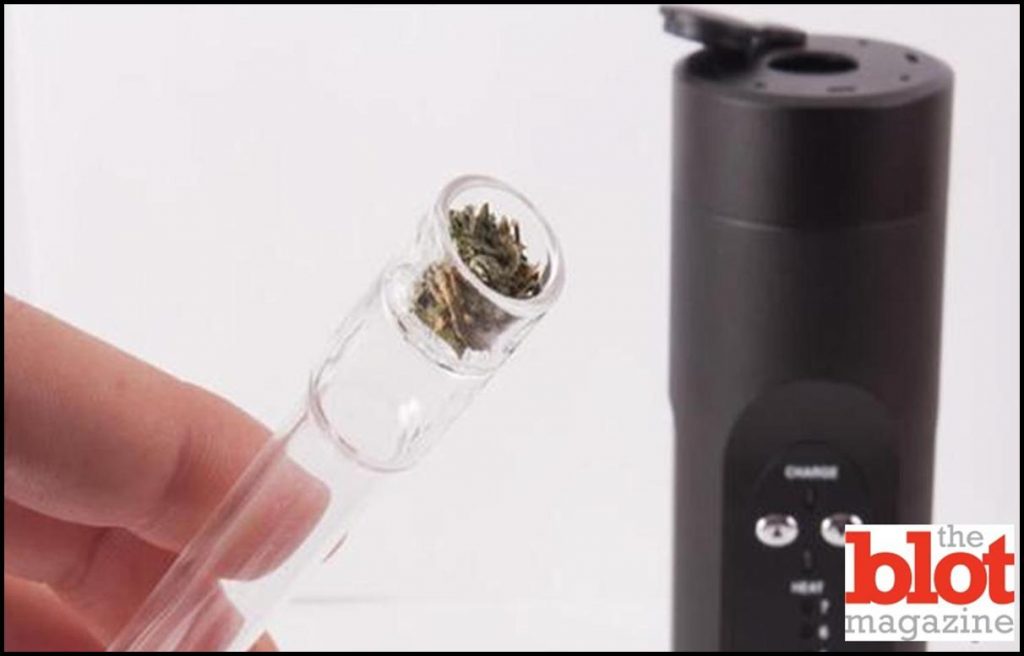 The Arizer Solo, the new future

The Arizer Solo arrives with a whole bunch of stuff you’re never going to use. It’s great — we’ll get to that later — but it comes with so many pipe add-ons and accessories that it can prove somewhat daunting as you’re unboxing it. There are three different pipes, one of which is curved, and you’re probably going to be using that one. I don’t know why you will, but it seems to remind everyone of a milkshake, and that’s why I think everyone I’ve handed it to has gone for the same curved pipe. Anyway.

To turn it on you need to press two buttons at the same time, then adjust the temperature, then wait. Putting the herb in means that you have to flip the whole thing upside down unless you want to spill precious, precious herb everywhere, and that too can be a pain, but let me tell you — once you actually get it down, it’s absolutely worth it. This thing hits strong and smooth like a seasoned professional baseball player in his prime.

It ain’t the prettiest-looking thing but it is the most versatile: some people hit the herb a little bit differently. Some people just want a quick toke. Others want to sit there and puff away. The Arizer Solo looks like something you’d buy at Sharper Image and operates like one, too; it takes a little while to get used to, but it’s worth it. There are seven different settings on there. Two of them you’ll probably use.

When I was 14 or so I really wanted a snowboard. It had all sorts of bells and whistles; as snowboarding advertising circa 1998 was very much in the “CHECK THIS SHIT OUT” category, I kinda wanted the one that promised the most “shit” — as a suburban kid I had no use for extra curvature to help accentuate jumps and grinds, but I was damn sure I wanted it. After all, I was pretty sure once I got it, then I would be a professional snowboarder in no time, right? That’s how these things work, yeah?

My dad wasn’t so sure — he wisely pointed out that we lived some four hours away from any snowboardable mountain and that I’d be much better off with, say, a guitar (which is what I actually got for Christmas that year, but that’s another story for a whole other time). But I fought him on it. I tore pages out of (my friend’s copy of) Snowboarder Magazine and showed them to him and said things like, “Dad, you don’t understand.”  How could he not fucking see how much this snowboard meant to me. It could do anything. It was the ultimate snowboard, Dad. Goddamnit.

Christmas came and went and I got a guitar (which I ended up loving), but for several weeks I resented him, saying, “My friends are going snowboarding,” to which he said, “You can rent one there.” At the time, the concept of “renting” anything seemed absurd — why pay money to own something temporarily? — and I scoffed at it.

Months and months went by. In November, nearly a full year after that initial Christmas, he and I ended up in a now-closed-and-forgotten skate store called Go Skate! on Almaden Boulevard. I was in there milling about looking for new skate shoes (Dad bought them, of course, because although I never realized it at the time he was pretty fucking great about that kind of thing) when all of a sudden I turned a corner and saw the snowboard that I’d wanted. I’d completely forgotten about it.

That’s the thing about the thing that you want: you inevitably forget it once you want something else.

I stood next to it. Touched its sides. It was beautiful. Just then, one of the employees showed up.

“Brah, that’s gonna be too small for you,” he said, as cheerfully as a guy working at a skate shop can be.

My dad heard that, and scratched the back of his neck. “See? You would’ve outgrown it in a year.”

I guess what I’m trying to say is, going back to the Arizer Solo now, is that while you may think you need something so bad, all the time, you’re probably going to either grow out of it or use it so infrequently that you don’t have a need for it. The Arizer Solo has three different pipes and seven different heat settings. That’s about 168 different ways to use it. I use maybe four of those settings, but those settings are damn good.

If you have $224 to spend on a vaporizer and are looking for more control, this is great. If you’re just starting out, this is too confusing. You only need what you need. You never want what you don’t need. Either way, it’s a great vape.