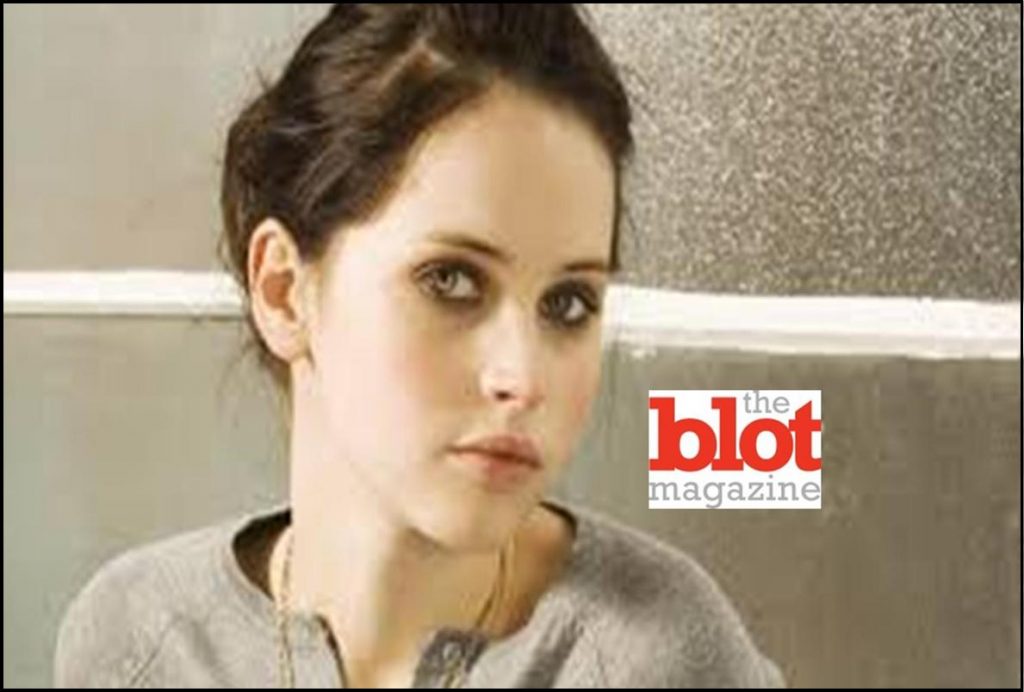 Felicity Jones, the most beautiful spirit around

Felicity Jones plays Sophie, an exchange student in the indie drama “Breathe In.” Sophie has come from England to stay at the home of Keith Reynolds (Guy Pearce), a high school music teacher in a mid-life crisis, his wife Megan (Amy Ryan), and their teen daughter, Lauren (Mackenzie Davis). The married couple has grown worlds apart and their only cement is a shared love for Lauren.

Sophie might’ve been a welcome distraction for Megan, but the guest is ill at ease and develops an ill-advised crush on Keith. He is distracted by Sophie’s presence in his home and cannot ignore her beauty, but Keith is intently focused on an audition for a job that he is hoping will fix his malaise.

Sophie never plays piano in their home nor in Keith’s class. He and the rest of the family grow puzzled by her aversion to practicing and her disquieting manner. Then Sophie surprises Keith and his students by sitting still on the piano bench. She slowly raises her hands and lets loose with a flawless Chopin. Keith is immediately drawn to her skill and it has hit a note within him. After that, the electrical charge they give off is almost painful to watch. I found myself wanting them to give in to passion and make a go of it, despite the inevitability that it would make things untenable for everyone.

How did you become involved with “Breathe In”?

Felicity Jones: This was really unusual. Drake asked me to do it. It was quite nice that I didn’t have to audition. Auditions are really, really frightening.

How was it working with Guy Pearce?

Fantastic. I’ve always admired his work. He’d never done a film where he was improvising before and I could see him relishing the challenge.

Was there a lot of improvisation?

Yeah, a lot. Some things were scripted, but most of it was how we made “Like Crazy.” We had an outline and then there’d be thoughts about character and what happens in the scene and then we’d bring dialogue in on the day.

I loved you in “Hysteria.” Isn’t it strange that Hugh Dancy is now playing such a dark character in “Hannibal”?

I think that’s what we always want as actors, to be able to take on different personalities. That’s part of the joy and I imagine he loves that too.

I have a film coming out late this year called “Theory of Everything,” which James Marsh directed. It’s about Stephen Hawking and Jane Hawking and their relationship, first meeting and falling in love and then Stephen being diagnosed with motor neuron disease, and it spans their meeting when they were in their early 20s to when they split up in their 40s. Also “True Story” with Jonah Hill and James Franco and I was in “The Amazing Spider-Man 2.”

Do you have a favorite movie you’ve done: “Like Crazy,” “Hysteria,” “The Invisible Woman”?

Was Ralph Fiennes a controlling director in “The Invisible Woman”?

It was a very different process from “Like Crazy” and “Breathe In.” Ralph always wanted to explore and he pushed me. It was always about trying to get to something truthful about my character.

Did you ever forget your line in a play?

Sometimes you do and you panic and look to the audience and hope for the best. That’s why it’s so brilliant to do it. You literally freeze on stage and think, “Why the hell am I doing this to myself?” But it’s really exciting. [Smiles]

Less fun than being on stage. It’s an odd experience. I think we humans tend to be quite critical of ourselves and it can be a hard process. You watch yourself and think, “I could’ve done that differently.”

Did you always know you were beautiful growing up?

[Laughs] Oh, that’s a nice compliment! I guess I don’t think in those terms. I try not to think too much about the outside. That’s never good.

Watch the trailer below.