FLORIDA MAN THREATENS TO KILL HIS NEIGHBOR WITH KINDNESS, BUT THAT’S HIS MACHETE

Florida so rules.  Seriously.  We all have funny neighbor stories.  Ok.  So we all at least know about funny neighbor stories.  But of course not all of them are funny.  Some of them are “funny.”  This is definitely the latter.  His name is Bryon Stewart and he’s from Milton, Florida.  In mid-January, there was a lot of yelling and banging going on in his home.  So two of his neighbors went over, concerned.  They knocked on the door and got a nasty, dangerous surprise.  Stewart answered the door and came out at them with his arm upraised.  But his raised arm had a machete.  Its name is Kindness.  Seriously, the Onion could not have written a better redneck satire.

MACHETE MAN SMELLED LIKE BOOZE, POLICE HAD TO USE TASER AND HOBBLE HIM IN SQUAD CAR

But you seriously can’t make this shit up.  So literally, we have a man who tried to kill his neighbor with Kindness.  One of the two neighbors stepped in front to protect the other and got a half-inch cut on his left hand from Kindness.  So they called the police who responded and quickly arrested Stewart.  But according to police, Stewart’s breath smelled like booze.  He also resisted arrest.  Police had to use a Taser on him just to get him in the patrol car!  But then it’s even more ridiculous.  Police then had to hobble Stewart after kicking in the squad car and slamming his head repeatedly.  Have you ever heard of that before?

So the authorities booked the crazy, drunk Stewart into the Santa Rosa Jail.  The charges include aggravated assault with a deadly weapon without the intent to kill as well as aggravated battery.  Stewart was reportedly still behind bars as he couldn’t post the $10,000 bond.  There’s no word how much kindness is to be had behind bars.  But Kindness is sure to be tucked away in an evidence locker. 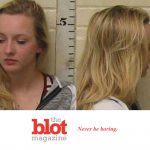