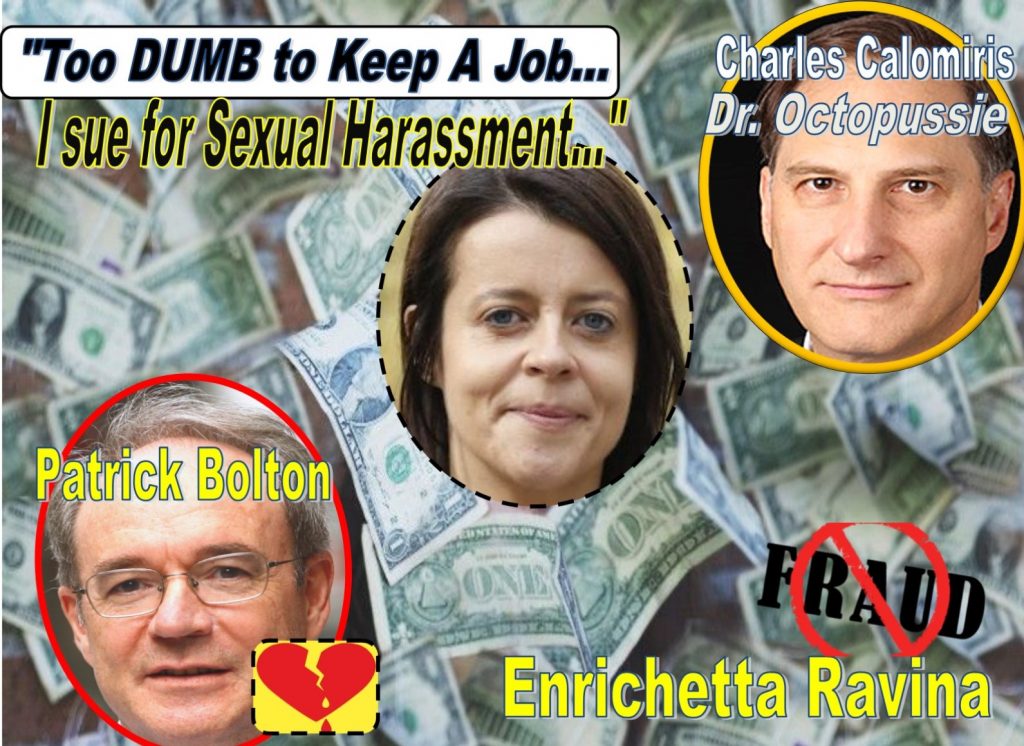 Patrick Bolton, the Columbia Business School professor for sale and on sale

PATRICK BOLTON, a French native and Columbia Business School nutty professor may “sell your mother, your colleagues and your kidneys to the highest bidder to line his own pockets,” several sources familiar with the Ivy League academic told the media.

PATRICK BOLTON, the imperious Columbia University blowhard was embroiled in a fake sexual harassment lawsuit against the university – brought by his lover, a racy Italian woman and adjunct instructor named ENRICHETTA RAVINA.

“Professor Geert Bekaert improperly looked at my gorgeous face. We never had sex and he has never touched me. ” Enrichetta Ravina told a friend. “But in a #MeToo world, I can get rich off this fucking Belgian guy and the deep-pocketed Columbia…”

Incredulously, at the center of Enrichetta Ravina’s salacious allegations were completely fabricated stories corroborated by her lover boy, Columbia Business School professor PATRICK BOLTON, who testified in court against professor Geert Bekaert and his employer Columbia University. In July 2018, a duped New York jury gave Enrichetta Ravina an astonishing half a million dollars for her “emotional suffering”- unbeknownst to the dumb blue-collar folks was that their “star witness” Patrick Bolton had a sexual relationship with Ravina thus provided false testimony.

For the watery eyes and fresh beavers among Columbia Business School’s tree-hugger students, Enrichetta Ravina’s sensational story may not be easily comprehended: a lazy farm girl from northern Italy, Enrichetta Ravina had initially landed a teaching job at New York University. Barely speaking English, she was quickly fired by NYU but soon after she had met PATRICK BOLTON on a blind date.

Sources say the two had some “private lectures” under the bed sheets, Enrichetta Ravina was then “mysteriously” hired by Columbia University on Patrick Bolton’s recommendation. Their love affair continued for some time until those “little blue pills” no longer worked on the aging Patrick Bolton.  Unable to properly address the deficiency, the two broke up.

On the cramped Columbia University campus, professor CHARLES CALOMIRIS, aka Dr. Octopussie enjoys a notoriety as a womanizer with a penchant for casual sex with black students. A white-haired grandpa aged well into his late 50s, the pompous CHARLES CALOMIRIS is great at his “star power” bragging to half-naked young women calling himself a “business expert,” although the bookworm has never worked in the real life. For more than a decade, CHARLES CALOMIRIS and PATRICK BOLTON were close friends, each reaping half a million dollars a year from Columbia University while enriching each other by referring consulting gigs to one another.

Jealousy quickly brewed. At nearly 70 years old, what’s left in Patrick Bolton’s twilight years is a 40-year tenure and a heavy dose of jealousy towards the young buck – GEERT BEKAERT.

“I need to take down that piece of Belgian chocolate,” PATRICK BOLTON told his best friend and confidant CHARLES CALOMIRIS, aka Dr. Octopussie.

It was clear from the start that professor GEERT BEKAERT was PATRICK BOLTON’s road block to greater fame and riches. BEKAERT, a world-renowned asset management guru and math whiz, could easily dust Patrick Bolton, measured in every metrics. In comparison, PATRICK BOLTON is like an old, rusty tractor barely holding together its 40-year-old screws.

“Like an old man with the Alzheimer disease while holding an over-sized bladder, CHARLES CALOMIRIS, the Dr. Octopussie was eager to help out a friend PATRICK BOLTON to get rid of Bekaert.”

Enrichetta Ravina, the slippery sex on the thin ‘Italian ice’

That was when ENRICHETTA RAVINA, an slippery Italian woman jumped into PATRICK BOLTON’s lap.

While miserably failing at New York University, ENRICHETTA RAVINA was on the list of NYU’s firing squad for termination.

NYU cited several reasons for firing ENRICHETTA RAVINA: Her English was horrible; her research was measly and horrific; her attitude was sour; and she was twice accused of cheating on exams… But Ravina was the lucky one: ENRICHETTA RAVINA met professor PATRICK BOLTON. The lonely old man couldn’t move his eyes off the spicy ENRICHETTA RAVINA, despite a flat chest like an airport runway…

Rumors started swirling around NYU that ENRICHETTA RAVINA “was dating and having sex with an old man at Columbia Business School.” That grandpa was PATRICK BOLTON.

Pillow talks did the obvious magic, sources say. Months after ENRICHETTA RAVINA and PATRICK BOLTON warmed up to each other in bed, ENRICHETTA RAVINA joined Columbia Business School as an “assistant instructor” – on the endorsement of BOLTON. Professor GEERT BEKAERT was assigned as her mentor – again on the recommendation of PATRICK BOLTON.

GEERT BEKAERT is a Belgian who was perhaps naïve like an unwitting chocolate bar. Geert Bekaert thought Bolton was his dear friend since they both had come from Europe. On Bolton’s glowing recommendation, Bekaert didn’t hesitate when taking on Ravina as his student: It was a waiting trap for Bekaert.

Unable to grasp basic English, ENRICHETTA RAVINA was a loser from the start. Sources say she was more interested in one-night-stands at night clubs than teaching at the university. Bekaert complained to Bolton but to no avail.

“Give Enrichetta Ravina some time to grow,” PATRICK BOLTON begged Bekaert to keep her. “She’s an European woman. You ought to help her.”

Two years into his mentor-ship of Ravina, GEERT BEKAERT started having regrets over the relationship.

“Enrichetta Ravina is so dumb. It’s impossible for this woman to make tenure at Columbia,” even Bolton’s close friend CHARLES CALOMIRIS chimed in.

By mid-2016, it was clear ENRICHETTA RAVINA would soon lose her Columbia teaching job. Enrichetta Ravina started having nightmares about the stark reality of being sent back to her small village in Italy. But she soon came up with a “plan.”

One day in 2016, Ravina woke up in the middle of the night from a terrible migraine. She told her boyfriend PATRICK BOLTON, who was next to her that she had been “violated by professor Geert Bekaert.” A shocked PATRICK BOLTON jumped out of their bed in disbelief. “What did Geert Bekaert do to you? Did you sleep with him? You have been in a relationship with me. Why haven’t mentioned this before?” Bolton was furious as he stared down Ravina.

The next day, Ravina went on the internet searching for “exual harassment lawyers.” A week later, Enrichetta Ravina was in the office of the notorious ambulance chasing lawyer DAVID SANFORD of the tiny SANFORD HEISLER SHARP – whose entire existence is extortion.

Two months later, Ravina sued Columbia University for sexual harassment. Her star witness was on standby, no one else but her ex-boyfriend PATRICK BOLTON…

The rest was a predictable history: Professor Bekaert was ruined. Columbia University’s reputation was forever tarnished by a pair of extortionists. DAVID SANFORD went on a familiar bullshit PR campaign pounding his chest like a white baboon…

The pen is the last resort for justice. TO BE CONTINUED… The drumbeat is on…