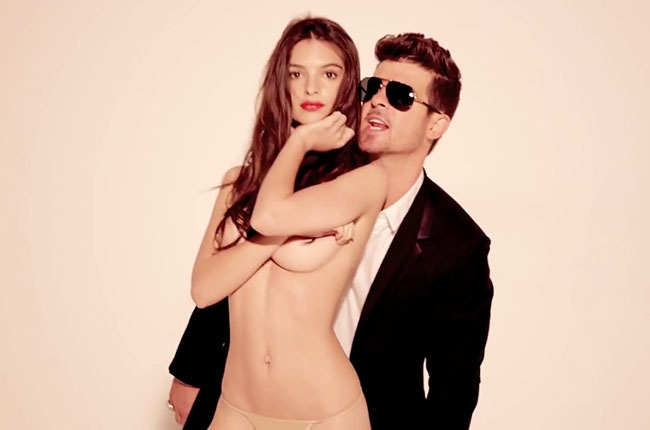 “Blurred Lines” is no longer just the name of a hit song. The National Theatre in London is now host to a play of the same name, which was created by Nick Payne and Carrie Cracknell and includes poetry by Michaela Coel. It is essential to note, however, that neither Payne nor Cracknell are entirely responsible for the play, as it was “devised” by the Company and then scripted by Payne.

The description of the play on the National Theatre’s website reads a bit like click-bait: “‘Blurred Lines’ is a blistering journey through contemporary gender politics. An all female cast dissect what it means to be a woman today: in the workplace, in cyberspace, on screen, on stage, and in relationships. This new piece explores the reality of equality in Britain today, where feminism is a dirty word and pornography is inescapable. ‘Blurred Lines’ is a fast-paced, razor sharp glimpse of a culture which promised liberation and delivered Robin Thicke.”

But what does that actually mean? The only concrete facts you can get out of that description is that:

Henry Hitchings of the London Evening Standard gives a much clearer account of the play, writing that “‘Blurred Lines’ begins with a simple yet potent scene in which women reel off the reductive terms with which they tend to be identified. One is a ‘Northern blonde, bubbly,’ another a ‘single mum, white.’ What follows is a series of vignettes, interspersed with musings and dance routines.” This sounds like an average night at the modern theater these days, but the show lacks that necessary punch that makes a real political statement. Hitchens says, “There’s barely any sense of history or context — or indeed a serious agenda for reform.”

Not that this sentiment is by any means shared by every review. Lyn Gardner of The Guardian certainly disagrees, calling the play “clever” and noting that “for too long the F-word [feminism] has been absent from our stages. For too long we have believed that gender equality has been achieved: the lie is exposed in a cunning sketch in which a working mother is told ‘not every job can be shrunk to fit every woman.'”

Now, I am all for calling out the sexism and rape culture in Robin Thicke’s song, because I am honestly appalled that it exists in the first place, and I’ll support anything that sheds light on gender inequality. But, for all that, this play doesn’t seem like it says anything new. I could find exposés on why being a woman sucks over on Jezebel and XOJane, or you know, in my general existence. I don’t need to pay £12 to go see some actors tell me the same things. I find it interesting that a male critic isn’t impressed by the show while a female critic praises it, for almost exactly the same reasons. Talk about gender politics, right?

Much as I think Hitchings’s complaint about lack of coherence is a bit of a case of misunderstanding the source material, I do think he has a point. I don’t think an audience needs a sense of history or context for something that is currently in the public consciousness. I mean honestly, you don’t need a history lesson to talk about things that happened a few months ago, and Thicke’s “Blurred Lines” was Billboard’s Song of the Summer. But a play isn’t a play if it only provides a problem. The basic story arc that a play follows ends with a resolution, but in a show about current problems, there is no solution. Since that solution is yet to come.

Nick Payne offers his own thoughts about the play in a piece over on Independent, and in it he expresses his ideas of how to end sexism and violence against women. It’s really worth a read. But it is obvious that, for Payne, “Blurred Lines” was a way to explore gender inequalities from the inside, and therefore shouldn’t give us a solution. Quite possibly because he thinks that solution is so simple. “Sexism and misogyny are like a virus; their influence is corrupting and insidious. But unlike some viruses,” Payne writes, “the antidote is deceptively simple: men, including myself, need to take full control of the way we treat women. We need to recognize our failings, accept that we are to blame for the appalling ways in which women are being treated, and we need to stop it.”

Perhaps, instead of thinking of “Blurred Lines” as a play, we should consider it a rallying cry to get feminism back on stage and back in people’s faces. Where it belongs.