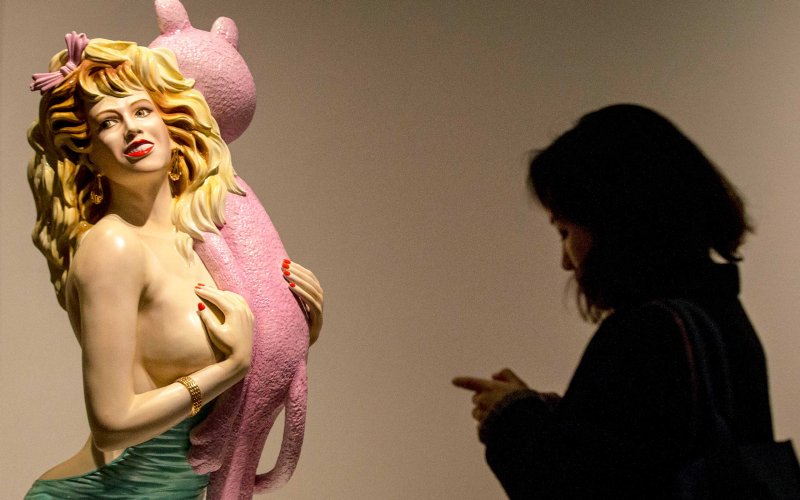 For many years, the contemporary art world got a little older.

The ingenuity that was previously so seamlessly well-meshed with financially relevant enterprise slackened, and questions were raised about the so-called next big thing in art. If nothing else, the key players solidified their positions in art history wonderland, making room for a fresher, more fun for the future. I think the art world is slowly but surely undergoing a radical transformation. Let the countdown begin to the new and more fabulous year!

The art fairs were in fine form this year, in that if they weren’t boring, they were overdone. Highlights of Miami included women hammering in a public space, heavy hitters like Thomas Houseago in the park, and Doug Aitken’s classic mirrored words inside the 303 Gallery booth. 303 had a noted Jacob Kassay this year as well.

Next on the scene are pop-ups … you never know where or when they’re going to strike, and as such, we gleefully get to jet off to who-knows-where. I must admit I don’t have the scoop on what’s bound to happen just yet, but don’t worry, I’ll keep you posted.

My inner 90-year-old WASP swooned a little too hard over Julian Schnabel in Greenwich. Give me a polo field and a roasting lamb any night of the week!

That being said, I know that the moment of the Brant Foundation has passed. Since the late 1960s, Peter Brant has had the business acumen to capitalize on cool. From Warhol to Schnabel, Brant spent the better part of 2013 showcasing decades of personalized history (not to mention investing) for friends and art lovers at his private residence. But the funny thing about history is that it has a way of staying in the past. It’s hard to be excited about Brant’s next move if he keeps delving deep into his vault. The move may draw comparisons to Steve Cohen’s oh-so-quiet dispense of capital. Julian Schnabel’s exhibition last month best expressed this sentiment: the preceding Warhol show was outstanding, in that it chronologized arguably the most famous 20th century artist in American history — but Schnabel is alive and in fine form, with almost no new work on view. Schnabel has the capacity to expand his painterly oeuvre, but from the comfort of the estate it seemed unlikely. Though Damien Hirst proclaimed the End of an Era with his 2010 Gagosian showcase, Schnabel’s too was a closing exhibition chapter.

Fear not, aesthetes! Julian has five hot children making big moves. Vito, his oldest son (who looks so much like his father), has been separating from the nest with his own curatorial enterprise. At this year’s Art Basel, he teamed up with Dom Perignon (that’s right, the champagne, perhaps you’ve heard of it). He is an enterprising art expert with all the right connections. Rumor has it he even dated Demi Moore. Vito is definitely the next Schnabel to watch in 2014.

This year, stolen and counterfeit art was found in basements and garages ’round the world. From Queens to the great stadt of Deutschland, the concept of what makes good art was called into question.

Upon further review, both these instances reflect big changes in commoditizing art. How is a painting validated in a culture that so seamlessly reproduces itself? Is ownership legitimized through paperwork, appropriation or integrity? Who decides these overarching laws of finite art understanding?

My best guess is the Internet, capitalization and all. The nature of widespread dissemination has the power to authenticate and even redetermine aesthetic and critical value. That Phillips had its first auction featuring digital art this year is suggestive of a new era. Let’s hope that in 2014, the ever-present digital word successfully integrates with art.

Lights. Dots. Feelings. Long lines. Good Instagrams though. I like colors. Over it. Moving on, please.

Maybe you remember Wu-Tang Clan … I definitely didn’t though. Please see No. 4 for reasons on that issue…

Anyway, in November, Wu-Tang celebrated its 20-year anniversary of “Enter the Wu-Tang (36 Chambers)” with a complete retrospective at the up-and-coming WALLPLAY, a Lower East Side project space. Within four weeks of the initial Wu-Tang showcase, there was an auction at the Neue House in Chelsea. Guests of these events ranged from Russian-Japanese artist Miya Ando to the sex expert Dr. Ruth, aged 85. WALLPLAY opened this year and promises to be bigger and better with each exhibition.

The Lower East Side promises to be a bastion of unfettered energy, and I’m really excited to see what happens on this same vein of fast pace.

Best of luck to the art world on New Year’s Eve and beyond. My only advice is to drink much champagne and think creatively.