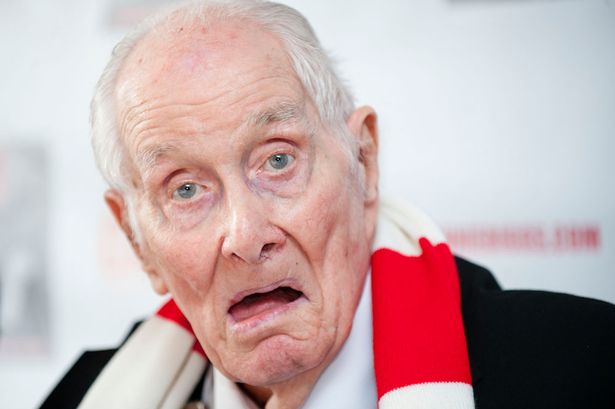 Most of the time, we upright citizens are appalled and disgusted by the criminal class. But every once in a while, a crook comes along who captures the public’s imagination, and we wind up rooting for him rather than cheering for the cops. In our history, there are John Dillinger, Bonnie and Clyde and John Gotti. In fiction, we have Tony Soprano, Michael Corleone and Tony Montana. Britain isn’t immune from this either — Robin Hood may have started the whole trend. This week, Britain’s last outlaw passed away quietly in a nursing home, but for decades, Ronnie Biggs was the most wanted man that Scotland Yard couldn’t catch.

Biggs was a working-class kid born in 1929 in Stockwell, one of London’s less-desirable districts at the time. He deserted the RAF in 1947, was dishonorably discharged, and wound up in a civilian prison for stealing a car. A failed burglary at a bookmaker’s office in Lambeth, London (next to Stockwell) put him in prison again, where his life changed when he met Bruce Reynolds. When Biggs got out, he tried going straight as a carpenter. And at 27 he married a 17-year-old with whom he would father three sons.

In 1963, Biggs was short on cash and went to Reynolds for a loan. Instead, Reynolds made him part of a 17-member gang that was going to rob the Glasgow Mail train on its way to London. He was a passenger in a standby getaway car, and never was part of the team that took the money off the train, nor was he anywhere near when the engine driver, Jack Mills, was beaten with an iron bar. He only saw the money when everyone got back to the farmhouse they were using as their headquarters.

While the gang executed a brilliant robbery, they didn’t go a very good job of ducking the cops. The police found a fingerprint belonging to Biggs on a ketchup bottle at the farmhouse. Three weeks after the robbery, 12 of the robbers, including Biggs, were in custody. In 1964, nine of the gang, including Biggs again, got 30 years each. And then, another adventure began.

Biggs served about 15 months in Wandsworth Prison in southwest London, and then, on July 8, 1965, he used a rope ladder to scale the wall, dropped into a waiting delivery van, and went to Brussels by boat. His wife and two of his sons (the third was not yet born) joined him in Paris, where he got new identity papers and had plastic surgery. One BOAC airplane flight later in 1966, they were all in Melbourne, Australia. He had a few odd jobs in Australia, eventually doing construction for Channel TV studios. In 1969, Reuters reported that the authorities had tracked Biggs to Melbourne. He left home that day, stayed with friends, and five months later was on a boat to Panama while his wife and kids stayed behind. A month after that, in early 1970, he arrived in Rio de Janiero. Why Brazil? Because at that time, the U.K. had no extradition treaty with the country. In fact, there wasn’t one until 1997.

In 1974, the Daily Express got information that Biggs was in Brazil, and Scotland Yard sent detective Jack Slipper to arrest him and try to get the Brazilian government to send Biggs home, despite the lack of a treaty. Biggs’s luck held; his girlfriend, nightclub dancer Raimunda de Castro, was pregnant. Brazilian law forbade extradition of the parent of a Brazilian child. Detective Slipper went home alone.

Safe from extradition, Biggs still had some trouble. As a known felon, he couldn’t work, visit bars or be out of his home after 10 p.m. And he had spent all the money on fake papers, travel and such. To support himself, he and his family hosted barbecues for tourists and other interested parties. For a few dollars, pounds, yen, reals, you could chow down on a burger and Biggs would tell you the story of his life — including the Great Train Robbery.

In 1977, his career took a bizarre turn. Right after the infamous Sex Pistols (Johnny Rotten, Sid Vicious, Steve Jones and Paul Cook) broke up after a disastrous tour of the US, Jones and Cook went down to Brazil for some sunshine and to figure out what to do next. Biggs wound up singing on two songs (“No One Is Innocent” and “Belsen Was a Gas”) for Julien Temple’s film about the band, “The Great Rock and Roll Swindle.” Released as a single in June 1978, “No One Is Innocent” went to No. 7 on the British charts. Biggs got royalties for that.

In 1981, a team of British ex-soldiers kidnapped Biggs for the reward money. Their boat got as far as Barbados before the engine conked out, and the Barbados Coast Guard rescued them. Like Brazil, Barbados had no extradition treaty with the U.K., and Biggs went back to Brazil.

In 2001, old, tired and sick, he announced that he was ready to go back to the U.K., not just for health treatment that was unavailable in Brazil, but also to “walk into a Margate pub as an Englishman and buy a pint of bitter.” Rupert Murdoch’s newspaper The Sun hired a private jet to fly him home and paid his son Michael £20,000 and other expenses for the exclusive story.

He arrived on May 7, 2001. Over 100 police officers met the plane, and Biggs was immediately arrested. He had another 28 years of his sentence to serve. Several appeals for clemency based on failing health were denied. One of these included this statement: “I am an old man and often wonder if I truly deserve the extent of my punishment. I have accepted it and only want freedom to die with my family and not in jail. I hope Mr. Straw [the Home Secretary who oversaw prisons as part of his job] decides to allow me to do that. I have been in jail for a long time and I want to die a free man. I am sorry for what happened. It has not been an easy ride over the years. Even in Brazil I was a prisoner of my own making. There is no honour to being known as a Great Train Robber. My life has been wasted.”

After several strokes and bouts of pneumonia the government relented, and on Aug. 6, 2010, he was freed. He moved from prison to hospital to a nursing home, and things looked bad. He said, “I’ve got a bit of living to do yet. I might even surprise them all by lasting until Christmas; that would be fantastic.”

He lasted until Dec. 18, 2013, the very same day that the BBC broadcast the first of a two-part series, “The Great Train Robbery.” Jack Gordon played Biggs. He commented, “What great timing and bad timing.”