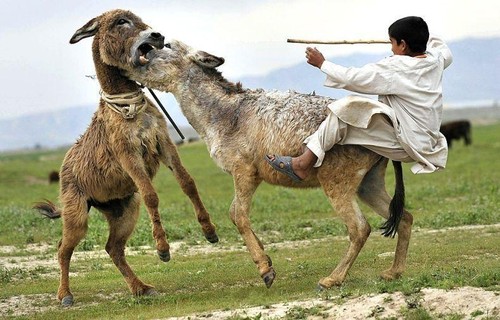 The aviation industry has been in the news quite a bit lately since the recent disappearance of Malaysia Airlines Flight 370, but this week airliners were in the spotlight for an odd series of events that happened on social media. A Dutch teenager’s “joke”tweet that went viral landed her in handcuffs and set the stage for an embarrassing Twitter gaffe made by U.S. Airways.

Here’s a look at how journalists covered some other (non-aviation) weird news this week:

Man Tries to Break Into Open Bar: Police in Maryland are looking for a man who tried to break into a bar that was open for business. The suspect reportedly tried to enter Buck Murphy’s Bar and Grill at around 2:30 a.m. last weekend only to find that the watering hole was filled with patrons. It is unclear what motivated the attempted break-in. [Baltimore Sun]

Convicted Bully Says Judge ‘Destroyed’ His Life: An Ohio man forced to wear a sign in public after being convicted of bullying a neighborhood woman and her disabled children says the judge who oversaw his case handed down an unfair sentence. “The judge destroyed me,” Edmond Aviv, 62, told the Associated Press on Sunday. The man stood on a street corner for hours over the weekend wearing a sign that read “I am a bully! I pick on children that are disabled and I am intolerant of those that are different from myself. My actions do not reflect an appreciation for the diverse South Euclid community that I live in.” Several pedestrians stopped to take photos of the man, who was also sentenced to serve 15 days in jail and undergo counseling for anger management. [The Associated Press]

British Man Claims ‘Allergy’ Toward Kim Kardashian: Mike Amess, a 24-year-old gay British man who tried to come to terms with his own sexuality by watching Kim Kardashian’s sex tape, claims that the reality star’s voice “makes me feel nauseous and shaky.” Amess says he watched the tape as a teenager in high school with the hopes that Kardashian would turn him straight, “but she made me feel more and more upset.” Amess says he goes to great lengths to avoid reading about or watching Kardashian on television, even breaking up with a former boyfriend who was reportedly obsessed with the show. “I have come to terms with my homosexuality now but my dread towards her has never left,” Amess says. [Daily Mail]

Teen Goes Missing After Having Sex With Donkey: A teenager from Zimbabwe is reportedly missing after it was discovered he had intimate relations with a donkey on his uncle’s farm. Police are searching for Mbongeni Dube who was arrested in March following the incident with the donkey. Though the boy was arrested, police note he was not detained as they were investigating the matter. He was ordered to appear before a magistrate on Friday but was nowhere to be found. [AllAfrica.com]

Baby Born With Four Arms, Legs in China: A 2-week-old baby boy is recovering at a hospital in China after doctors surgically removed six extra limbs from the infant. Doctors say the baby was supposed to be a twin, but the fetus didn’t develop properly during the mother’s pregnancy, leading to a single infant with extra arms and legs. The baby, who was also diagnosed with pneumonia and cognitive heart disease, is said to be in stable condition following the surgery. [Global Times]

Missing Boy Turns Up in Claw Machine: Employees at a bowling alley in Lincoln, Neb., still aren’t sure how a missing 3-year-old boy turned up in one of their toy claw machines on Tuesday. Police were initially called to an apartment near the bowling center on a report that the child had gone missing. By the time police arrived at the bowling alley, they connected the two cases. The child was freed from the machine without incident. [WOWT]