Diversity on television is like the Loch Ness Monster. It’s greatly talked about, but rarely seen. The few times you think you catch it, it’s not even the real thing. Hollywood seems to define diversity as an obligatory African-American cast member … paging Winston from “New Girl!” But it’s not just having people of different races, looks, sexual orientations and ages.

An important key to diversity is actually integrating these characters into the world and the storyline. Although some shows like “Modern Family” include LGBTQ characters and people of color, they use them mostly for bad stereotypical jokes. There are a few shows that are doing a great job of spreading actual, genuine diversity so that the rest of the world knows large cities like New York are not as white as they were on “Friends.”

“Brooklyn Nine-Nine” is one of the best examples of diversity on television. Despite being filmed in Los Angeles, it has a better handle on New York City than some shows actually filmed there. It doesn’t force the characters to be people of color or pander to stereotypes. Its characters are not defined by their race, sexual orientation or age; they are cops with unique foibles and idiosyncrasies. They just so happen to be a Latina woman, a gay African-American or an older chubby guy. It’s also worth noting “Brooklyn Nine-Nine” has two Latina cast members and neither one of them has worn a mini-skirt or high heels, which seems to be the only way to represent Latin women on television. It also doesn’t get caught up in defining gay character Capt. Ray Holt (Andre Braugher); he is neither masculine nor feminine, he’s just a stoic married police officer who happens to be gay.

“Orange is the New Black” is not just changing television by legitimizing Netflix series. It also just such a great blend of people of all different backgrounds. Ironically, despite segregating characters into “tribes,” a popular prison troupe, it’s authentic about real people. Sure, “OITNB” deserves some props for casting transgender actress Laverne Cox, but it didn’t just pimp her out — the series integrated her character and explored actual transgender struggles in prison. The second season further opened up the world and focused on some formerly minor characters. Miss Rosa (Barbara Rosenblat), the irate cancer patient is revealed to a Latina who wasn’t ignorant, poor or used sex as a weapon. Instead, she was a gifted bank robber who suffered from her own hubris. Poussey (Samira Wiley), Taystee (Danielle Brooks) and Black Cindy (Adrienne C. Moore) evolved from the sassy Greek chorus and were given a lot of serious storylines. The series also presents a fluid sexuality for its characters and doesn’t dwell in defining their sexual orientations. The members of the cast are from different cultural, classes, generations and ethnic backgrounds, but at their core, they are all women, and they are all prisoners.

Despite originally being founded as a Christian channel and still airing the conservative “700 Club,” ABC Family is providing diverse programming for teens. It showcases teens of different backgrounds and races including some a deaf high school student on “Switched at Birth” or a bi-racial lesbian swimmer on “Pretty Little Liars.” The best series by far is “The Fosters” which presents an actual Modern Family. A lesbian couple builds a family with some biological children and some adopted foster children. There isn’t a quota for what race everyone should be, but the show has biracial cast members, Latinos, African-Americans and other people of color. Plus, it acknowledges the complexity of sexuality. Stef (Teri Polo) was married and had a child before she met her partner. One of the children, Jude (Hayden Byerly) is questioning his sexuality, but the series isn’t forcing him into a box.

It’s great that these series are helping set a gold standard for how to integrate people of color, members of the LGBTQ community and “real”-looking people into television. These aren’t better by virtue of having fulfilled some PC-quota. They are better because they are mirroring the world we live in. There will always be jobs in Hollywood for hard bodies, blonds and models, but here’s hoping that we can also have sexy actors that represent a wider, non-stereotypical spectrum — and also have a little room for “normal” yet talented actors. 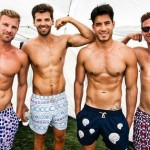