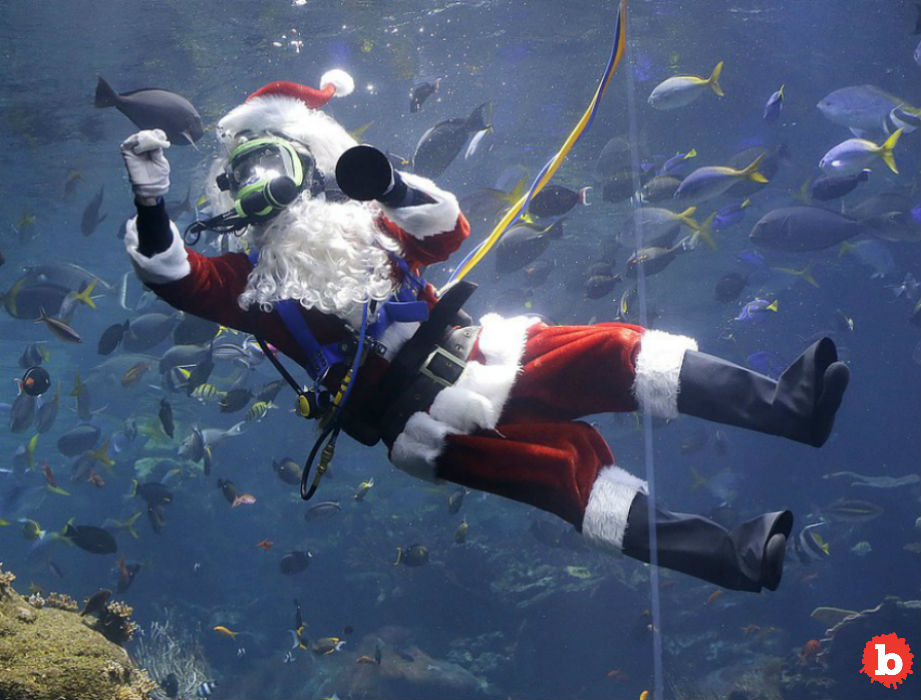 KIDS AMAZED TO SEE SCUBA SANTA AT BERLIN’S SEALIFE AQUARIUM, BEARD AND ALL!

So this is certainly not Santa Claus the way I remember him.  But it is certainly pretty cool.  And definitely wet!  And no, this isn’t Jason Momoa doing a holiday crossover in Berlin, Germany.  But it is a fairly new annual tradition, where Santa does something just… slightly different in each Christmas season.  So as you can see above, Santa totally went underwater to feed some big game at Berlin’s Sealife Aquarium.  Personally, I’m pretty impressed just with the idea.  I mean, who would ever think you could wear a Santa suit underwater and it would be cool?

Well, I would, for one.  But it’s the kind of water cooler idea that most would instantly Deep Six.  But the folks at the Sealife Aquarium definitely know how to have a god time during the holidays.  So for all the parents out there, wouldn’t your kids totally want to see this?  Shoot, I’m pretty old and I think it’s totally cool.  You can’t even shoot your eye out!  But not pictured above is the Little Helper Santa had underwater, an angel!  I mean who ever heard of an underwater angel, too?

But this is a great idea for the holidays, anywhere.  Anything that gets kids to pay attention means they are learning about what’s in front of them.  An angel fish takes on all new meaning when you see Santa feeding one underwater!  It’s the kind of thing you never forget.  But the Sealife Aquarium isn’t afraid to break new ground.  It’s one of the largest water zoos in Germany and may well be the oldest.  It’s been around since 1915!  So this holiday season, remember to add this location to your Must Visit List.  Merry Underwater Christmas!