The frog was a sign. A warning with webbed toes, reminding me there was another explanation for the name bestowed on the Forest of Fate. This story also explained why the Forest of Fate had no trees. In fact, the Forest of Fate looked the same as the rest of the desert. If you didn’t know, you wouldn’t know, as they say. A stranger in these parts would see dust and sand without knowing that the dry land used to be salted with trees.

I will tell you the story I’d heard long ago, but I’ll get details wrong because that’s what happens when tales are told. More accurately, it wasn’t a story but “lore,” for it wasn’t entirely true, but it also wasn’t entirely made up. All local legends have more than a shred of truth; the difficulty is figuring out which shreds are false. Human nature being what it is, the wrong threads invariably end up getting pulled.

Here is what I remember of the version I’d heard, a version using old-fashioned words like “slavering” and “garroted,” words that sound good enough to eat yet aren’t used anymore in normal conversations. Which is kind of too bad when you think about it.

Anyways, here is the story:

At the heart of the Forest of Fate, there was a mighty castle. It was the home of a powerful king whose daughter was so lovely that the sight of her set withered loins aflame. Old, young, male, female, rich, poor, peasant, king … no one who saw this rare beauty could resist her. She had the legs of a gazelle, the breasts of a dove, the waist of a wasp, the neck of a swan and the luminous eyes of a startled doe. Because her father couldn’t bear to share her, he built a wondrous palace out of the finest materials and surrounded it with deadly barriers. A prisoner of her own beauty, she enjoyed the greatest luxuries, the most gorgeous dresses, the attentions of many slaves and a magnificent view of rotting corpses impaled on spikes, floating in the moat and garroted by wire snares.

For death was the fate of every suitor who came hoping for a glimpse of the beautiful princess Amnesia, and none could escape the traps laid to catch them. Only the king could pass safely through the traps for he’d designed them himself to protect his precious daughter.

The sight of so many failures did little to discourage other suitors, as each believed that he or she could outwit the snares, the pitfalls, the hidden springs setting off crossbows that shot poisoned arrows into their foolish, yearning hearts. Ignoring every warning sign, they kept trying to break into the palace and steal a kiss from the fatal princess. Irritated yet secretly pleased by the fact that his deadly designs were working so well, the king procured a flock of vultures and a pack of hyenas to consume the corpses, as the aroma of decay was attracting too many flies.

This development prompted the groundskeepers to insist that the Master-at-Arms stop using poisoned arrows, because the poison was making the exotic pets sick when they consumed the foul meat. Grumbling, the Master-at-Arms switched to plain arrows instead, and the keepers were satisfied that no more innocent animals would be harmed while carrying out their duties.

With each passing year, Amnesia became more alluring, her beauty so irresistible that no human was allowed to look at her. Not the chefs who prepared her luscious meals, not the ladies-in-waiting that plumped her goose-down pillows, not the king’s guards that stood at the gold portal, not the slaves that cleaned the marble floors of her privy chambers and not the physicians that examined her when her stomach began to swell.

For Amnesia had a secret.

At first, the king had blinded her servants, plucking the eyes out of the kitchen slaves and blindfolding the highborn ladies who dressed her. When this strategy proved impractical, the king hit on another plan.

When others were in Amnesia’s presence, she would be shrouded from head to toe in a red velvet cloth that hid her face and disguised her form. The thick cloth even covered her mouth and eyes, but the hood had been pierced by a tiny pinhole, just a tiny prick, so small it was impossible to spot if you didn’t already know where to look. The hole hung suspended over her right eye, giving her just enough light to see but making it impossible for her to seduce others with a shy glance or soft wink.

“You are royal,” her father had explained as he placed the final cloth over her drooping head. “It is your duty to remain covered as a sign of generosity. To protect others from your beauty.”

Flattered, Amnesia had nodded her head and agreed to his terms. She’d known it was useless to protest; her father was the king. But she didn’t mind being special above all others. More than a princess. A pearl beyond price.

Mirrors were forbidden in the princess’s palace, so she had no idea what others saw when they looked at her. But she was so rarely alone that she began to think of her velvet shroud as a pelt, and her ghostly white skin as the silvery layer that gets exposed when dead fur gets peeled. Daily she stood at the barred window of the highest tower of her magnificent palace, peeping through the tiny hole pierced through the heavy velvet draped over her flower face, her swan’s neck, her bee-stung waist, her cooing breasts, her restless legs and looked down on the half-eaten bodies of her suitors rotting in the sun.

“They died for me,” she told herself and felt an odd sense of pride at the power she held over them.

She had no books, she could not read; she had no interests, no amusements and no skills. Her only purpose was to be beautiful yet unseen, living in the kind of luxury that makes others drool with envy. She was the princess Amnesia, adored and admired, wealthy beyond the dreams of avarice and the most beautiful woman in the world.

With cloth-wrapped hands turned into clumsy paws, she would follow the tufted grain of velvet and stroke the scintillating plush lavished over her flesh, stroking it the way one might stroke a chained lion, knowing the pleasure was dangerous and at any moment the seeking hand might get bitten off by moist and slavering jaws and yet she kept stroking, stroking, because it was the only way she knew she was alive.

If, from a distance, using a spyglass and the sharp eyes of youth, you stared very hard through the iron bars at that column of cloth the color of fresh blood, you might catch a glimpse of something glittering wet in the depths of that tiny peephole hovering in front of the spot where a right eye ought to be found. Or maybe you’d see nothing at all.

Then Amnesia surprised everyone by giving birth.

B.B. Young is the author of the serialized novel “The Peepshow,” which is published exclusively by TheBlot Magazine on Tuesdays and Thursdays and features images by artist Joel B. Feldman. Read Chapter 1, Part 1, The Boy with the Backpack, Chapter 1, Part 2, Anyone Can Call Themselves a Murderer, Chapter 2, Part 1, Here’s Good, Chapter 2, Part 2, The Man with the Box on His Head, Chapter 3, Part 1, The End of the World, Chapter 3, Part 2, Don’t Go There and Chapter 4, Part 1 The Forbidden Path. 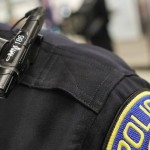 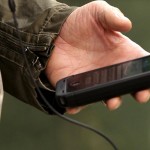