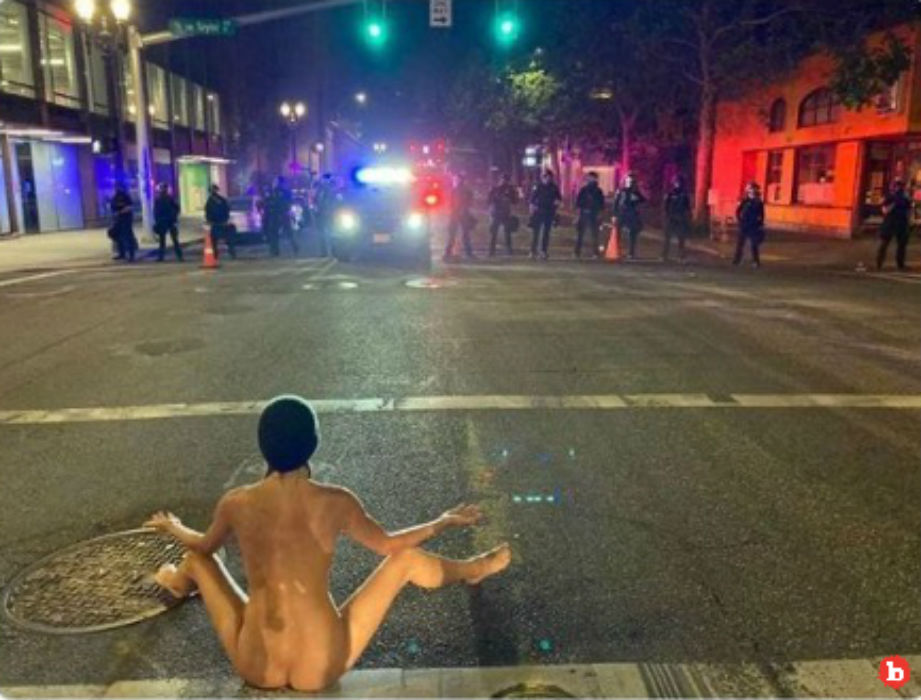 So the situation in Portland, Oregon is now on everyone’s radar.  Anonymous federal agents are now acting as agent provocateurs, making things much worse.  Just as the protests were dying down, Trump sent them in.  And the results so far portend more violence to come, maybe across the United States.  Protestors aren’t backing down from the feds, not at all.  But that will keep things hot, and dangerous.  Yet one protestor made a statement of power the likes of which we haven’t seen, maybe with the exception of Pussy Riot.  The internet is calling her Naked Athena.  And that’s exactly what she is, a naked goddess baring all in the face of authoritarian thugs.  And yes, they shot at her.

NAKED ATHENA WORE NOTHING EXCEPT FOR A MASK AND A BEANIE CAP, TOTAL WOMAN POWER

Because a naked woman acting fearless isn’t the kind of thing that militarized thugs tend to take too kindly to.  In fact, any kind of refusal to kowtow to these types is met with major hostility.  But a tall, naked woman making a statement?  Officers shot pepper balls at her feet.  Pepper balls, you may know are non-lethal projectiles.  But they hurt like hell when they hit you.  And that’s wearing clothes.  And clearly, the Naked Athena wasn’t wearing any.  Just a mask and a beanie cap.  So far, we still don’t know who she is.  Hopefully, and for her safety from Trump fanatics, she will remain anonymous.

She went out and lay down on the road in front of the officers.  Then, she put her feet up in the air and practiced a number of yoga and ballet positions.  Everyone who was there looked on, pretty shocked at what they were seeing.  But when officers fired pepper balls at Naked Athena’s feet, another protester quickly stepped up in front of her with a shield for protection.  But she didn’t stay behind it long, moving back in front of it.  The officers decided to leave about ten minutes after she put herself on display.  She left shortly afterwards.  And the best part?  She said not one word the entire time.  Naked Athena doesn’t need words.  Or time to duck. 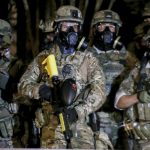