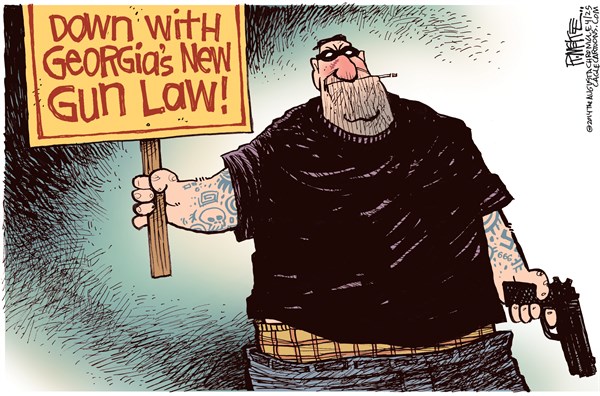 Guns are the best things in life

As April ends, Georgia has a new law on the books that the National Rifle Association has hailed as the “most comprehensive pro-gun bill in Georgia state history.” The Safe Carry Protection Act goes into effect on July 1, and it will allow people with a Georgia Weapons Carry License to take firearms into schools, bars, churches, airports and government buildings. This law is an experiment that should prove once and for all whether more guns make us safer or deader.

Right now, Georgia holds 10th place in the state-by-state gun violence rankings. Indeed, between 2001 and 2010, twice as many Georgians died in gun-related incidents as U.S. troops did in Afghanistan and Iraq. Roughly 500,000 people in the state, about 5% of the population, already have the license needed to take their guns almost anywhere. So, if Georgians die at a lower rate from guns than during recent years, the NRA will be proved right, that more guns make us safer. And if they die at a higher rate, the case for tighter gun control becomes overwhelming.

The gun lobby has a friend in the governor. Nathan Deal signed the bill, saying, “We Georgians believe in the right of people to defend themselves, and we believe in the 2nd Amendment.”

As you might expect, the law supporters argue that this will make everyone safer. Jerry Henry, executive director of GeorgiaCarry.org, a group that supported the bill’s passage, said the new law will “give the law-abiding citizen more protection in more places.’’

On the other side, the argument against the law has brought some high-profile names into the fight. Raphael Warnock, senior pastor of Ebenezer Baptist Church in Atlanta, where Dr. King preached, called the new law “insanity.” Pastor Warnock added, “The mother of Martin Luther King Jr. was shot and killed in our sanctuary in 1974 while playing the Lord’s Prayer one Sunday morning. She was killed by a deranged teenager who had access to a gun but not enough access to mental health care. Forty years later, I think that problem is exacerbated by the signing of this law.”

Now, I am something of an agnostic when it comes to guns. They are like power tools; they have a specific purpose (killing) and if you don’t know how to use one, you probably shouldn’t. Most people don’t need a band saw or a jack hammer any more than they need a gun. It is also true that there are times and places where they make perfect sense. I am not sure, however, that those times and places include Saturday night at the bar, Sunday morning at church, or 10 a.m. in Miss Johnson’s third grade class.

The Georgia law does allow bar owners and church congregations to ban guns themselves, and I believe there are enough responsible people in Georgia that a great many premises will ban guns. There is always a minority of idiots (often, though uncomfortably close to a plurality), and that’s the trouble. When lethal weapons are involved, the more idiots you have, the more dangerous the situation — but you only need one idiot.

Where I do have a real issue with this bill is the fact that guns can be taken into government buildings and airports, save for areas past security check points. So, there could potentially be a few dozen guns at the ticket counter at Atlanta’s airport, every town hall and most state government offices. Call me paranoid, but I was in New York on September 11, 2001 — those places are on the jihadi list of places to hit. Georgia has just made the jihadi’s job easier. Of course, the pro-gun guys will say that the presence of those guns will deter any attack, or if it doesn’t deter, it will allow law-abiding citizens to deal with the attack.

Well, we shall see. There are only three possible outcomes for this experiment. A higher death rate due to guns, a lower one or one that is statistically the same. Logic dictates that we change our approach to firearms based on the result of this experiment. I am willing to bet, however, that after a year or two of this law, whatever the empirical evidence shows, America’s gun policy will still not be driven by facts but by passions.

The only thing worse that conducting human experiments is conducting them and then ignoring the results.