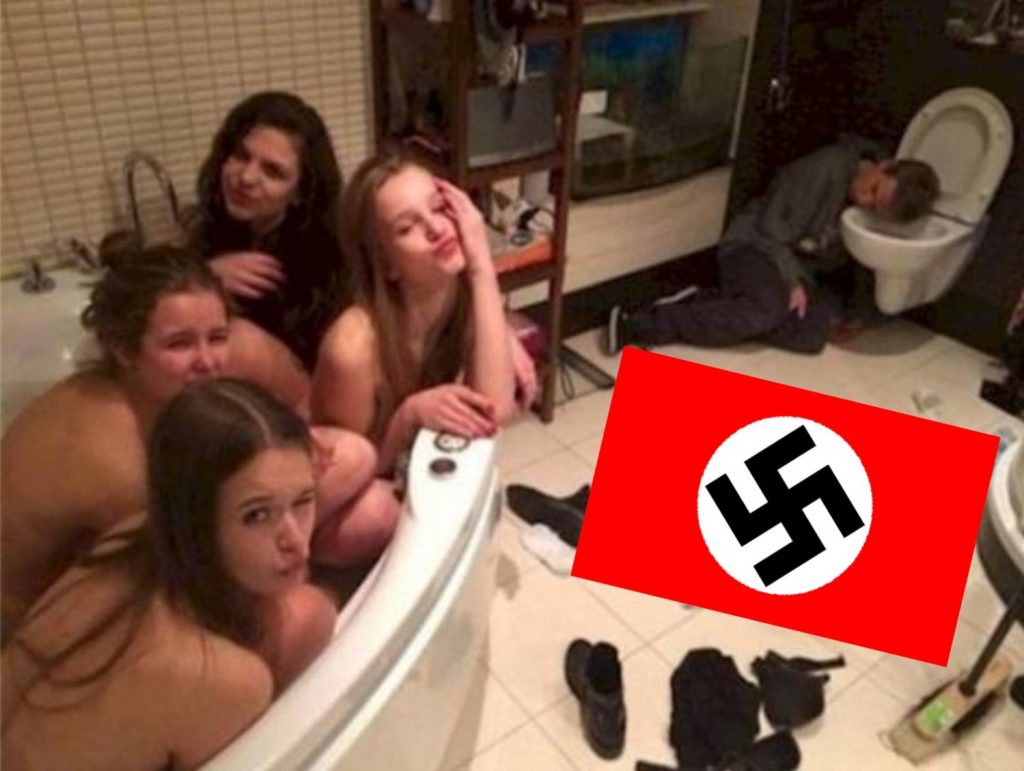 Over the weekend an American asshat thought it would be a good idea to go out just after 8 in the morning while drunk and give the Nazi salute to strangers.  In what should be no surprise to anyone a passerby kicked the shit out of the American idiot as he left a café called Europe in a progressive neighborhood called Neustadt.  It’s a popular area for students, so it’s quite understandable a stranger saw this fool and sought to educate him via impactful osmosis.

The asshat American idiot was only identified as a “severely drunk” 41-year-old who luckily only suffered minor injuries.  The stranger who beat him up fled the scene before police arrived.  Interestingly, the American asshat idiot is under investigation as promoting or using Nazi symbols (such as flashing the Nazi salute) are against the law in Germany.  The passer-by stranger who beat him up is also being sought for causing personal injury.

The Nazi salute — the right arm straight and angled slightly up, palm down — was used as a greeting and a way of expressing devotion to Adolf Hitler under the Third Reich. Germany outlawed the salute after World War II, along with Holocaust denial and other symbols and signals associated with the Nazis. A conviction can carry a prison sentence of up to three years, although courts often impose fines instead.

The Dresden incident occurred just a week after two Chinese tourists were detained for giving Nazi salutes outside Berlin’s Reichstag, once home to the Imperial Diet. The two tourists were fined nearly $600 each but were permitted to leave the country with their tour group, police said. Similarly, a 30-year-old Canadian tourist was detained in 2011 after being photographed giving the Nazi salute outside the Reichstag. He, too, got off with a fine.

Germany is not the only European country to ban the salute. Earlier this month, Switzerland’s Supreme Court upheld the conviction of a man who appeared in 2013 photos making the Nazi salute outside a Geneva synagogue. Every year, hundreds of right-wing protesters from across Europe march in the eastern German city on February 13 to commemorate its bombardment by allied forces toward the end of World War II. Dresden had no strategic military significance and its destruction remains a dark chapter for the allied forces, which has been used by the far-right to stoke anti-American tensions.

AS IN AMERICA, FEAR THAT FAR-RIGHT HATE GROUPS WILL CAPITALIZE ON HISTORY, ANGER

In recent decades, the February 13 commemorations have repeatedly escalated into large-scale violent clashes between Nazis and participants of counter-protests, who fear that the far-right could hijack the city’s destruction during World War II for its political purposes.

Members of the region’s far-right movements have also made no secret out of their fascination with Hitler. The leader of a Dresden-based anti-migration group, Pegida, was once photographed with a Hitler mustache, for example. And last year, a group of Nazis on a train near Dresden forced a 32-year old Indian to perform a Hitler salute, raising fears of anti-immigrant attacks in the region.