It’s a good thing my wife has an alibi on the other side of an ocean! Normally public service announcements have something to do with the weather, runaway animals or missing people.  But when police issue something like the following, you know something a bit more unique is going on: “Anyone offered large quantities [of chocolate] via unconventional channels should report it to the police immediately.”  This was an instruction issued in Germany, where people were shocked to hear that more than 20 tons of Nutella, Kinder Surprise Eggs and other chocolate sweets disappeared when thieves stole a refrigerated trailer packed full of the goodies.

The stolen collective confections are worth more than $80,000, according to police reports in Neustadt, Germany.  But the plot gets sweeter, and more organized.  A spokesman also told local media that the thieves had to have had a truck of their own to haul such heavy cargo.  But local German newspapers were sure to note that this past weekend another trailer went missing, this one packed with more than 60,000 pounds of fruit juice in Wittenberg.

THE FLIPSIDE: Fat Americans, Plus Some Food for Thought

OTHER STRANGE HEISTS FORGET THE LAST 60 YEARS IN TRI-STATE AREA, EVERY MOSBTER MOVIE

Now, it should be noted Germany is not the only place to suffer from brazen grand theft larder. Of course, there was that time Austrian police sniffed out — literally — more than 9 tons of stolen garlic stuffed into vans crossing the Hungarian border. Or, if you would prefer to go against the grain with a stateside story, there’s always that guy who stole a bakery’s delivery truck in New York City and started randomly passing out bread — all the while clad only in his underwear.

And chocolate hasn’t been safe in the U.S., either. Earlier this summer, NPR’s Laurel Wamsley reported that two members of an alleged Russian crime syndicate were charged with arranging “the transport and sale of a whopping 10,000 pounds of ‘stolen chocolate confections’ to a government informant.”  But let’s remember that 10,000 pounds is only 5 tons….

For now, though, German police are hoping to spread the word about the Nutella theft. And if you should happen to come across more than 20 tons of chocolate lying around, the local police spokesman offered another helpful suggestion: “I wouldn’t throw any of that away.”

Seriously, has anybody seen my wife? 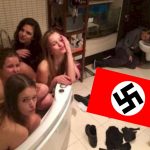