If Friday at New York Comic Con was almost indescribable, then there’s only one word to capture Saturday at the Con: frenetic. And also jam-packed. Like, to the gills, where you had to fight, slowly, to make your way down the many aisles of exhibitors on the floor of the Jacob K. Javits Convention Center or even on the equally crowded concourse outside the main exhibitor area.

Every few feet, you’d have to stop because of a traffic jam or so people in front of you could take a picture of a Con-goer posing in an elaborate costume (which you then snapped a few pics of your own because, well, you’re right there) or crane your neck to spy who was signing at a particular booth or dodge a faux (you hope!) weapon attached to someone’s attire. This writer got hit in the head with more than a few swords and even a tentacle or two. (Not complaining, though — it’s part of the fun!)

It may have been slow going almost everywhere at NYCC yesterday, but that’s just Saturday, which has always been the day everyone in attendance goes balls to the wall.

TheBlot Magazine attended a press hour for Adult Swim’s upcoming cartoon, “Mike Tyson’s Mysteries” and sat at roundtable discussions with producer Hugh Davidson, cast member Rachel Ramras, who plays Yung Hee, and the man, the myth and the legend himself, Mike Tyson. Be sure to check back on TheBlot later this month for the story, but to tide you over until then, there’s a great picture of Iron Mike by Tom Roarty below — and 24 more of our favorite Con captures from Saturday.

Tom Roarty is a contributing journalist and photographer for TheBlot. 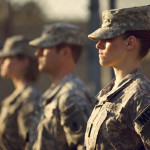