So we all can use a great feel good story from time to time.  And this one certainly qualifies and how.  Khemjira Klongsanun is 43 years old. She was totally committed to the Chombeung Marathon in the Ratchaburi region of Thailand.  So I don’t know if you’ve ever run one of these dastardly torture events.  But when you’re less than a third of the way thru the running, you’ve just figuring out if you even want to survive to the end.  So picking up a lost puppy with about 19 more miles to run is no casual commitment.

Khemjira was only about 7 miles into the run when she noticed something a little strange in front of her.  Runners were trying to avoid something in the road and were side stepping at the last second.  But when she got to that point she saw it was a little puppy in the road!  So she stopped and saw that it was a lost, little Thai wolf dog.  She wrapped it in her running towel to protect it from the glare of the sun.  I’ve never heard of such a thing happening in a marathon before!

The amazing marathon runner said, ”It seemed to me that this little guy was lost. There were no houses, no other dogs, or no people around. So, I picked up the puppy, if only to take him out of the unsafe environment.”  Well, that’s the least that she did.  She carried the puppy the entire remainder of the race.  But that was 19 miles!  I doubt she trained to carry a puppy any distance at all.  But she finished the race and there’s a happy ending, too!  She adopted the little lost puppy and named it Chombueng, after the race that changed their lives. 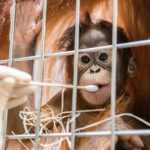 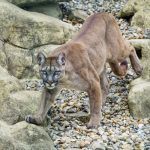