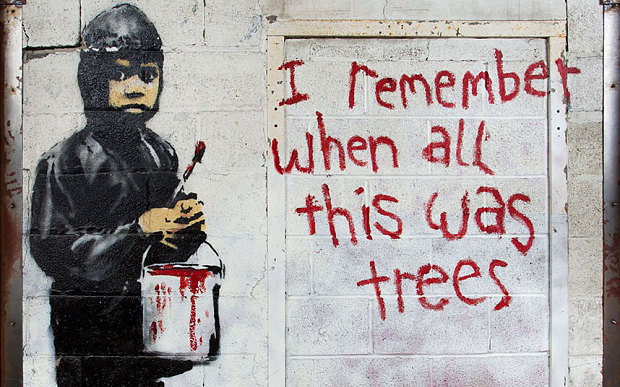 Banksy is like God, in that he is ever present but never seen, with only his work as evidence of his existence.

Though London-based, Banksy has been in New York for the month of October, in a residency referred to as “Better Out Than In.“ He has been making headlines for his Chelsea wall play, his Central Park pop-up shop, and most recently, his slanderous op-ed regarding the Freedom Tower (perhaps intended to be in cohesion with his Twin Towers artwork). The latest news is that Banksy was all set to have a showcase at the Century 21 flagship in the Financial District, but it was abruptly cancelled due to his disrespectful article, which decried the Freedom Tower as “a disaster. Well no, disasters are interesting.” The piece was also allegedly set to print in The New York Times, but was pulled and ended up exclusively on the artist’s website. Banksy formatted the piece with an authentic NYTimes font and logo as a snarky reminder.

If anything is definitively known about Banksy, it is this trademark satire, social commentary in distinctive stencil graffiti — and more recently, performance. Earlier this month, Banksy was behind a delivery truck full of stuffed animals to the allegorical slaughterhouse, aptly named “Sirens of the Lambs.” Just beforehand, Banksy’s Central Park store sold a total of $420 worth of $60 paintings to just three tourists passing by. An old man (not the artist) sat outside with the works all day. At the end of the month, Banksy’s work was auctioned for the online shop Housing Works for over $157,000. In 2008, his work sold for over $1 million at Sotheby’s.

From an art historical standpoint, Banksy’s work refers to a period of graffiti in the 1980s largely influenced by Blek le Rat, proclaimed by his website to be a “graffiti stencil pioneer.” He began in the 1980s with small stenciled rats on the streets of Paris, and continued with larger figures and tributes well into the 2000s. Like Banksy, Blek le Rat has traveled for his work to New York and Los Angeles, though he is based in France.

While Banksy’s art speaks of a larger-than-life personality, the actual biography of the artist remains ambiguous. What we think we know about Banksy is all secondary hearsay. Two British men have been purported to be the artist. The first is Robin Gunningham, born in 1973 and raised in Bristol, known as a gifted artist with an interest in graffiti. Gunningham left school at 16 and was inspired by the music scene of the early 1980s, dodging police and experimenting with his art. Robin’s official whereabouts are unknown. Banksy may also be Robert Banks, an institutionalized youth with a history of drug use. All sources are speculative, matched to Banksy’s self-published (and yet ironically, anonymous) art critical memoirs. New Yorkers have been frantically trying to follow the artist around snap photos of the mysterious man … to no conclusive avail.

The myriad of submitted photos could potentially be showing the artist, suggesting that despite this ethos of egocentricity, the Cult of Banksy is actually a fragile phenomenon. A prime example of disempowerment of the image is Banksy’s work at Cooper Union, a formerly tuition-free university in New York City that recently began charging. Banksy’s confessional stencil wasn’t exactly defaced, but the students seized the opportunity to use the work as a vehicle for their own financially related activism. They turned the Banksy figure into a bearded representative of Cooper Union’s founding president, and sprayed “Free Cooper Union!” on the side of the piece. What began as a Banksy ended as another student protest, and essentially, Banksy’s trademark was lost in the hubbub.

As November dawns and Banksy fades out again, the same questions continue, and the same energy follows him … wherever he may be.