Hotness gone bad.  Or is this a case of not aging well?  The former bombshell turned publicity bomb Heather Locklear is not getting the news her publicist likely wants.  The actress who played Amanda Woodward on Melrose Place had a bad, bad night.  While I never watched the show, I once went thru puberty.  So I know who Heather Locklear is.  She’s a hot celeb.  But police arrested her at her home in Thousand Oaks, which is not sexy news at all.  Police responded to a call about a physical altercation.

Police arrived at her Thousand Oaks home after Heather’s brother found Heather and her boyfriend in a physical altercation.  We know that the brother called the police, which makes this kind of a sadder story.  If your brother calls the cops on you, that makes it sad, right?  He must have felt it was necessary.  Police arrived to find the boyfriend with a “visible mark.”  That’s not good.  But Heather did not respond well to the police showing up.

PUNCHED THREE COPS, KICKED ONE IN THE BALLS

“She punched the lady cop and called her a “c**t”, kicked one of the male cops in the balls and punched the third male cop and called them all “f****** assholes” ranting at them,” according to a witness.  But what can you expect the police to do?  When they tried to take Heather into custody, she got aggressive and flailed her arms and tried to kick them.  Heather hit three different cops before they got her into handcuffs.  That sounds like a dramatic and awful scene.  Police took heather to an area hospital for evaluation.

HISTORY OF DUI AND SUBSTANCE ABUSE, PRIOR DOMESTIC CALL

But the 56-year-old hot celeb has had trouble with substance abuse and the police before.  She’s been arrested for DUI.  Back in 2011 police responded to yet another domestic call with her then boyfriend.  But this latest drama was also witnessed by Heather’s daughter, Ava, and “unknown male.”  Both are reported to have been mortified by the drama.  So far, we don’t know if Heather faces pending charges.  But it’s clearly a sad story. 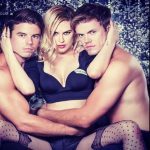