I have been cooking for about 35 years now. I had to learn when I moved to London at the age of 19. I knew absolutely no one there, so if I was to have a home-cooked meal, I would have to do the cooking. A load of burned meals later, I could hold my own in front of Gordon Ramsey (till I hit him in the mouth for being rude Scots git).

In that time, I have seen and tried a load of different kitchen gadgets. Some are quite useful (e.g., food processor, although the name sucks), but a great many are quite stupid. I was wandering through a kitchen supply store the other day and noticed a couple. Before the day was out, I had this baker’s dozen of useless kitchen items. 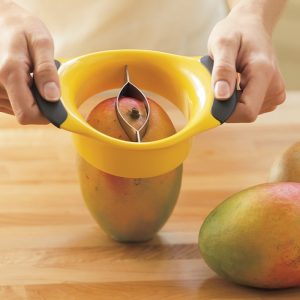 This isn’t inherently a bad idea. Pitting a mango with a knife takes a bit of practice. However, this gadget requires you to balance the mango on its end in order to slice through it. And with all slicers wedged into a plastic or metal handle, it will go dull, and you can’t sharpen it easily. Have you ever tried to balance a mango on its end? 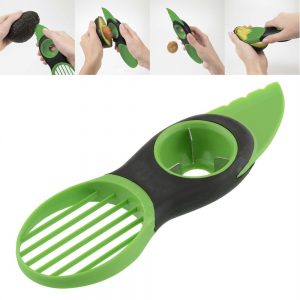 This is slightly worse than the mango pitter because avocados are really pretty easy to work with. Cut all the way around to part it. Stick the knife edge into the pit to remove it, and then slice up the flesh however you like before spooning it out. This is a solution looking for a problem. 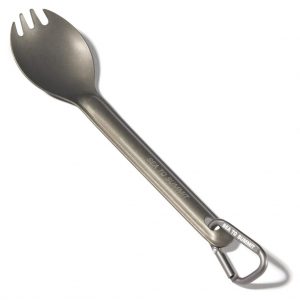 OK, the spork is an OK idea for food on the go; it’s part spoon and part fork. It serves neither function well, but in a pinch, it’s fine. But seriously, if you aren’t in a pinch, just use a real spoon and a real fork. 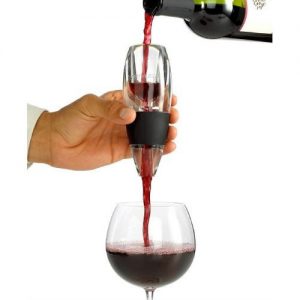 If you are the kind of wine snob who needs to let the Burgundy breathe, you aren’t in a hurry. Decant the damned stuff. An aerator may be scientifically valid, but if you didn’t spend $30 on the bottle, it’s really not that useful. And if you spent more, you really shouldn’t hurry things. If your wine comes in a 5-liter box, by all means, use one. 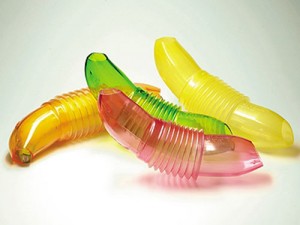 If you don’t want to have a squashed banana in your brown bag lunch, this plastic banana sheath will protect it. I haven’t put a banana in a bagged lunch in years; I don’t remember the last time I did, in fact. So if I am not putting a banana in a brown bag, why do I need it? And I know – it looks like something else. 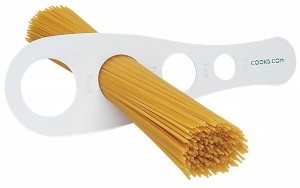 Sometimes in cooking, you really do need to measure carefully. Cooking pasta is not one of those times. If you don’t make enough, it doesn’t take long to make more. If you make too much, it refrigerates. And if you have been cooking pasta for more than a month, you can eyeball it just fine. And how do you use this on shells, elbows, etc.? 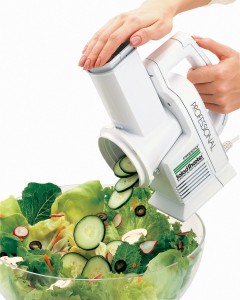 Late-night TV introduced this useless thing to me. It combines salad and shooting, which is something Salvador Dali might have painted. If you need to slice a lot of cucumbers, a mandolin slicer is better, and a knife works just fine. But if you absolutely have to pretend that you’re firing salad projectiles, go for it. 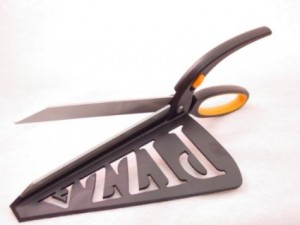 Cutting pizza into slices isn’t all that hard. The circular pizza cutter they use at your local pizzeria seems to be just fine. Knives work. Why use a special pair of scissors? And I am going to have to point out that left-handed people are at a disadvantage because scissors are designed wrong for us. If there isn’t a left-handed version of this, screw ’em. And if there is, what the hell is anyone doing designing something so incredibly silly as left-handed pizza scissors? 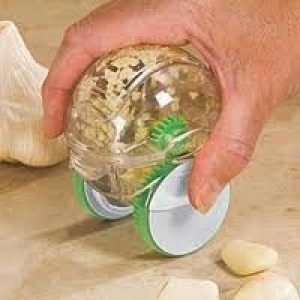 This is a device that crushes peeled garlic by rolling it around on the table. Now, I find the garlic press a useless thing; just bash your garlic with the flat of a knife like Emeril does. Arguments over how to use garlic always remind me of that scene in “Goodfellas” where the wiseguys are cooking in the prison. “Paulie did the prep work. He was doing a year for contempt, and he had this wonderful system for doing the garlic. He used a razor, and he used to slice it so thin that he used to liquefy in the pan with just a little oil. It was a very good system.” If he had used a garlic zoom, he woulda been sleepin wid da fishes. 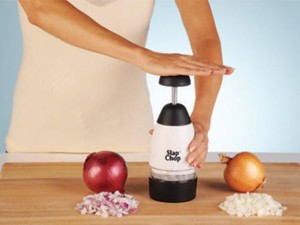 I guess this is cathartic for people who hate their food so much they need to slap it. This is another late-night TV product that doesn’t have a prayer of entering my kitchen. You put the stuff to be chopped in it, slap the button, and it presses a blade down. Theoretically, this chops the food. When the blade dulls, it will merely mash it. And sharpening is impossible. Just how many different ways are there to fail when it comes to improving on a damned knife? And if I am not mistaken, didn’t the spokesman for the Slap Chop get busted for punching a hooker? Or am I thinking of a mega-church leader? 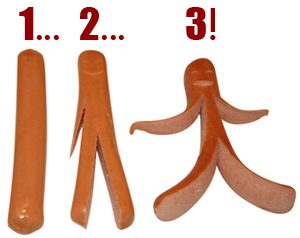 Getting kids to eat is a challenge sometimes. Turning their hot dogs into little men with this device is cute, but if you need to do this so many times that a special tool is required, you need to get the kid to a doctor. Eating disorders are not overcome by cutely presented tubesteaks. 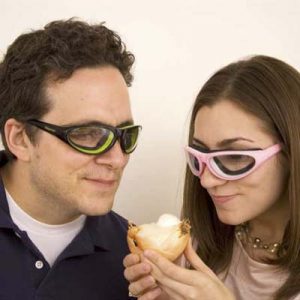 I don’t know anyone who likes the tear-gas effect that chopping onions has. These special goggles, though, seem to be sort of prissy. Giada De Laurentiis doesn’t use them, and I am a bit more macho than she is. Maybe a welding mask kind of thing would work, but that goes back into the realm of surrealism.

Eggs are among the most versatile foods out there. They are in everything, and there is nothing you can’t do with them. But as this video shows, there are some things you shouldn’t do to them. 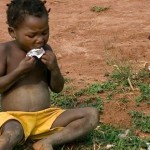 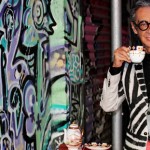