The flag that belongs to all

There has been so much talk of flags lately, from the Gay Pride rainbow flag being draped across buildings and social media to the Confederate flag so solemnly protected by generations of residents of the South now being seen as a sign of hate.

Although both symbols have supporters for and against their respective causes, along with varying opinions as to what they actually represent, the one thing they all have in common is that flags do not come without conflict. By its very nature, a flag represents a belief, and the more open you are about your beliefs, the more opposition you will find against it. In an age when conflicts could be started within 140 characters, do we really need further graphic representation of our sometimes misrepresented radical choices?

During the Middle Ages, flags were first used in battle to distinguish sides. From its violent beginnings, new flags were created to represent new ideas, spawning new oppositions. As time went on, the symbols took to the seas and reached the far corners of the world, evolving in symbolism and idealism with each incarnation. A perfect recipe for destruction is the graphical representation of an idea with a complete lack of education of what is it supposed to represent, something we tend to do a lot of these days. Even our ability to easily access information at the click of a button does not allow us to understand how individuals interpret what a particular banner might mean to them personally, so why celebrate any flag?

Back in 1978, Gilbert Baker, an artist and drag queen, first created the rainbow flag. Following in an interview with the Museum of Modern Art, Baker stated, “We needed something beautiful, something from us. The rainbow is so perfect because it really fits our diversity in terms of race, gender, ages.” The idea behind the flag was and still is a harmonious one celebrating people and their ability to express themselves without need of fear. However, the opposition to Gay Pride will say that the flag represents unnatural acts, undermining the words of God and established religion. So much so that, to this day, more than 35 years later, the flag is still frowned upon by a large majority of the population through a disgusting display of ignorance.

On the flip side of the “lets-celebrate-unconditional-love” debate is the Confederate flag, which is also in the center of major controversy after a racially motivated shooting left nine people dead at the Emanuel African Methodist Episcopal Church in Charleston, S.C. last month. When the flag was first introduced during the Civil War back in the mid-1800s, it was used to identify Confederate troops during battle. This is where the controversy due to ignorance comes into play. The Confederate flag was a battle flag and was never considered a national flag. What that means is that, since its inception, the Confederate flag was never a representation of slave states or a symbol for racism. Just like those who associate the sins against God with the rainbow flag, the Confederate flag’s meaning was bent to the will of those just looking for a way to tear down a symbol of something they don’t believe in — even if that symbol, which, may I remind you is a peice of cloth — is not to blame for the causes they against.

Sure, over the years, people have adapted the Confederate flag to represent destructive behavior, but the rainbow flag has also had its share of controversy, being vindictively displayed during Westboro Baptist Church rallies in recent years as a symbol against God. The point is, any symbol can be misinterpreted to have a positive or negative effect dependent on those delivering the message. However, maybe there is one flag that all people could agree upon, and I propose that that flag be the Jolly Roger.

During the early 18th century, the Jolly Roger, aka a traditional pirate flag, was flown to distinguish ships occupied by pirates before the start of a battle. As barbaric as pirate culture may have been, the mentality of that culture is possibly more suitable to our current events and encompasses what has become our modern-age ideology, which is to take what we want, when we want, without fear of consequence or compassion for, or from, our fellow man.

The Jolly Roger basically solves all of our problems and encompasses our mindset as supposed civilized humans. If we don’t like something, we destroy it or stigmatize it to the point of it being obsolete, something pirates had no problem doing. There was no need for trying to convert people to a pirate mentality because, in essence, a pirate mentality is everyone for themselves, without care to convert those who did not follow their idealism. So why not abolish all the flags of this world’s varying beliefs and become unified under the high-flying skull and crossbones?

After all, it would at least be a true representation as to what we have all become, so maybe it’s time for us to embrace it. 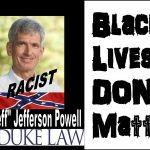