With his buffoonish comments, absurd ultimatums and obstinate refusal to back down on anything, Donald Trump has seized headlines and strangely advanced in the polls.

This may be the first time that a person who was basically a joke candidate became the front runner! But there were other wacky candidates before Trump, ones that — while they might not have had a snowball’s chance in hell — outshone him in terms of opinions and laffs. Here are the eight most memorable ones:

Jello (aka Colorado-born Eric Reed Boucher) was the lead singer/songwriter for the punk band the Dead Kennedys, but that’s just one of his multifaceted talents. He’s also a member of the Green Party and, as such, he ran for the presidential nomination in 2000, only to be beaten by Ralph Nader. In fact, he was beaten to a pulp: Jello only got 10 votes. (The fact that his running mate was controversial death row inmate Mumia Abu-Jamal might not have helped.) Jello is an advocate for human rights and has used all kinds of pranks and other attention-getting shtick to shine a spotlight on various issues. He’s even criticized Obama, and though I sincerely doubt he could have done better, he’s definitely superior to Trump!

A comedian known for his deadpan commentary on the Smothers Brothers’ shows, Pat ran for President six times (1968, 1972, 1980, 1988, 1992 and 1996, the year before he died), and he even got some votes. It was a satirical campaign, filled with double talk and baloney, but he still came in second to Bill Clinton in the ’96 New Hampshire Democratic primary and four years earlier, he was the runner-up to George Bush in the North Dakota Republican primary. Alas, Bush won, I guess proving to be a better comedian.

Terence Smith’s drag character Joan called herself a mashup of Bowie, Divine and Grace Jones and fiercely ran for president on the Queer Nation Party ticket with the slogan “Lick Bush in ’92!” She also ran four years later with the updated motto “Lick Slick Willie in ’96!” Alas, she was licked, but I’ll never forget what she brought to the whole circus.

Robert Burck’s not really naked — he wears boots, underwear, a cowboy hat and a guitar — but standing there in his skivvies in Times Square all year ’round takes balls, so I always assumed Burck was a lefty liberal angling to bring back some raunch and freedoms. Wrong! The Cincinnati-born exhibitionist is a staunch conservative who ran for President in 2010 as a candidate for the U.S. Tea Party movement. Awful! But still better than Trump!

The comic/TV star was the 2012 nominee for president on the Peace and Freedom party, having lost the Green Party nomination she so dearly wanted. And she did well, nabbing 61,971 votes, which put her in sixth place. Roseanne was outspoken against corrupt Wall Street types and generally had some healthy commentary concerning the people polluting the system, though she clearly needs to be educated on trans issues.

Jonathon Albert “The Impaler” Sharkey is a wrestler/Republican who quit the 2012 presidential race, but vows to run again in ’20, just waiting for the whistle to blow. And he definitely stands apart from the pack. Sharkey claims to regularly drink women’s blood — “a very healthy thing to do” — and he’s a Luciferian, having rejected the idea that there’s a benevolent God watching over us all. He would outlaw abortion and the teaching of evolution (I guess he believes that Satan created the Earth — and considering some of these candidates, he may have, LOL), but he’s for gay rights and for legalizing pot and prosties. Oh, and he’s had legal troubles up the wazoo. A right-wing vampire? Yikes. But still, he’s better than you know who. Maybe.

Waka (real name Juaquin James Malphurs) is a Queens-born rapper who grew up in Atlanta and became known for songs like “No Hands” and for appearances on VH1’s show “Love & Hip Hop: Atlanta.” (He’s also doing a spinoff.) Waka’s campaign for prez has been characterized by some serious positions (He favors a $15 minimum wage) and some silly ones (no one with big feet should be allowed to walk in public), but it’s all moot because of his various legal problems, plus the fact that some of his statements will surely keep him far from the job. Stuff like “A blunt a day will take the pain away” and “Fuck the Congress. I am Congress. I’m President.” But whether or not his feet walk in public toward D.C., I’m sensing that the guy doesn’t really want to be POTUS, he just wants to get press and advance himself. Like Trump!

Marilyn made a splash in the 1972 porn film “Behind the Green Door,” in which she played a socialite who’s dragged to a sex club and has lesbian and interracial encounters, just for starters. For some zany reason, Ivory Soap instantly dropped her as the pasty-cheeked model on their box, but who cared? She’d become a household name and went on to a David Cronenberg film (1977’s “Rabid,” in which, after a skin graft, she became a blood-sucking vampire like Jonathon Sharkey), theater and a 2004 grab at vice president as Charles Jay’s running mate on the Personal Choice party. (She got 946 votes.) She tried again in 2008, as a write-in candidate, but again, no dice. I interviewed Chambers at one point and was highly impressed by her brains and her composure. I’m pretty sure she would have made a great vice prez behind the white door! 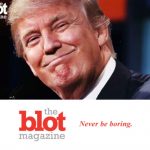