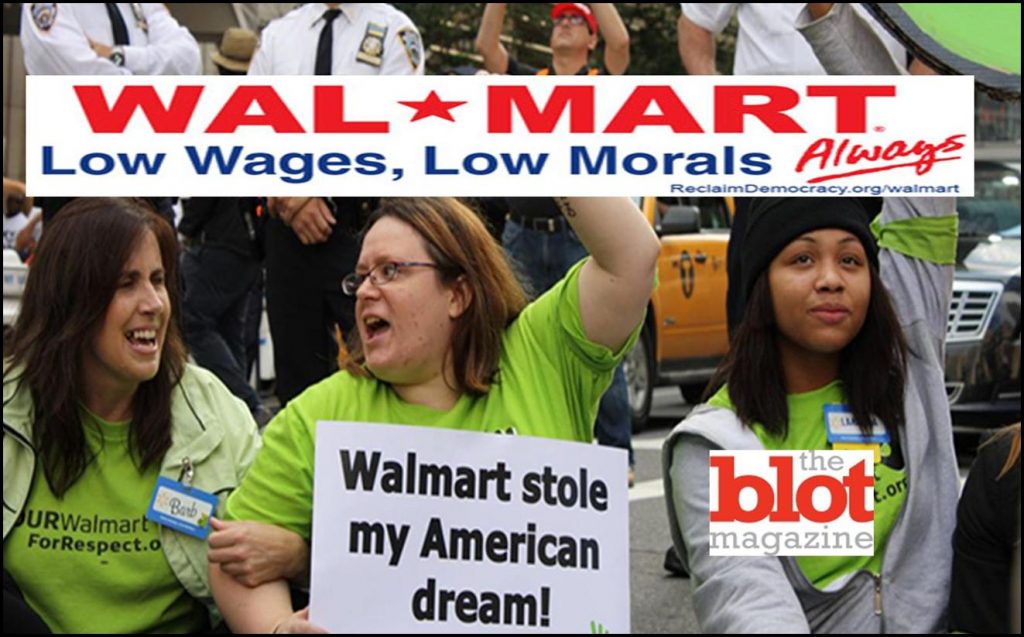 Walmart. The name alone conjures fear, loathing, and an almost intrinsic revulsion in the saner Americans. The giant, cavernous blue boxes filled with goods will no doubt one day be left for only the aliens to wonder what the living f*ck we were thinking when we systematically sent all of our manufacturing labor to the Chinese in the late 1960s. We got cheaper products, but literally destroyed the working class. That’s what happens! Did you not think there were repercussions to shipping manual labor out to other countries?

Well, a Walmart in Ohio recently had a food drive. I know. That sounds like a good thing, right? Except this food drive wasn’t for a charity; rather, it was for the workers themselves.

The Cleveland Plain Dealer — a local paper — first reported on the food bins that are situated in employees-only parts of the store.

Is the food drive proof the retailer pays so little that many employees can’t afford Thanksgiving dinner?

Norma Mills of Canton, who lives near the store, saw the photo circulating showing the food drive bins, and felt both “outrage” and “anger.”

“Then I went through the emotion of compassion for the employees, working for the largest food chain in America, making low wages, and who can’t afford to provide their families with a good Thanksgiving holiday,” said Mills, an organizer with Stand Up for Ohio, which is active in foreclosure issues in Canton. “That Walmart would have the audacity to ask low-wage workers to donate food to other low-wage workers — to me, it is a moral outrage.”

Walmart, the corporation, raked in over $15.7 billion in profit in 2012. Asking its employees to help out other employees rather than pay them an actual living wage seems, to many, a complete insult to the people that work at Walmart. Walmart pays around $10 an hour per worker — department leaders can make up to $20 — and the living wage per person per household is around $15. Walmart could, very easily, pay the employees an extra $5 an hour given the staggering profits they receive per year.

You’d think employees would perhaps form a group to protest this injustice, right? Wrong. Walmart has frequently gone after unions and has a strict anti-union policy. Thus, their royal screwing of their own employees effectively goes unchecked until, well, America reaches a point where people can no longer live on $10 an hour.

We’ve reached critical mass here, folks. While the six beneficiaries of the Walmart fortune — that’s six people — have more wealth than the bottom 30% of American families combined, you know something is hugely amiss. These profits aren’t going anywhere but the shareholders’ pockets, leaving the megarich to simply stay rich while the poor have to donate amongst themselves in order to eat a Thanksgiving meal.

It’d make you sick if you weren’t already used to it.