PREGNANT WOMEN IN CALI SMOKE WEED, A LOT OF WEED

Is this a surprise?  Or is this just a “natural” development as weed becomes more accessible to the public?  A study was recently undertaken to see just how many pregnant women use marijuana.  The authors got their data using anonymous records from a pool of 30,000 women living in California.  All of them were covered by the largest HMO in the US, Kaiser Permanente.  But are the results really surprising?  From 2009 to 2016, the self-reported numbers of pregnant women in Cali using marijuana almost doubled, from 4.2 to 7.1 percent.  That’s a lot of pregnant women who smoke weed.

STUDY SAW GAP IN SELF-REPORTING AND ACTUAL POT USE

The results were found in a couple different ways.  Pregnant women all have a normal prenatal check-up at the 8th week of pregnancy.  At this check-up these women were asked to fill out a standard medical questionnaire and to take part in a drug screening, all voluntarily.  This allowed the researchers to see which women admitted to using pot.  But it also allowed them to see how many of the same women actually tested positive for marijuana use.  This allows the researchers to get a better idea about the gap in self-reporting and actual marijuana use by pregnant women.  At least in California!

But it’s the youngest pregnant women who use pot the most.  Again, is this a surprise?  In 2016, 22 percent of teen mothers tested positive for marijuana use.  Women aged 18-24 clocked in at 19 percent.  Unsurprisingly, less than half of these women self-reported their use.  This highlights a new impact for the legalization of marijuana use: pregnant women and their unborn children.  But what is the real impact?  The short answer is, we don’t know yet.  But traditional alarm bells are sounding the alarm about the dangers of marijuana.  So if you’re pregnant and you smoke weed, maybe wait to learn more.

Do you like me or not? Women attracted to the Unknown

While there are real and substantiated concerns about pot use and still-developing brains, no one really knows what this means for pregnant women.  For decades, the most cited study proving marijuana was dangerous to our health proved to be….. completely false.  But cannabis is finally being studied.  So we will slowly learn what using pot does to our bodies.  Again, the first studies of pregnant marijuana users showed a lower birth weight and other health issues.  But then a review could not confirm any links, at all.  So right now there is no evidence that smoking pot while pregnant is bad.  But what does that really mean today?

Regardless, the study also learned that 80% of the women who participated in Cali believe that marijuana use while pregnant has no risks.  That’s a bit stunning.  Doctors tell pregnant women to avoid raw fish just for mercury exposure.  But the giant California market will legalize marijuana use for all in 2018.  So the rest of the country will quickly learn what the impacts are.  Ice cream and French fries futures should jump tenfold….. Pregnant munchies are on the way. 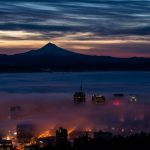