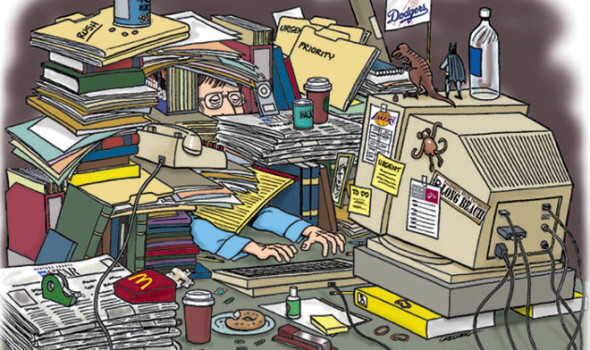 Do we all hate the United States Postal Service? Some say USPS is truly a piece of crap.

I go to open one of the front doors at 3:30 p.m. Locked. Wait a second. That can’t be right. This place is open until 5:30 p.m. I try another door. Oh, I see what’s going on. The people who work here don’t bother unlocking all the doors. What a fun game!

I enter. The United States Postal Service’s line winds through the entire lobby area, making DMV and Disney World queues look like a walk in the park. To my surprise, there are brand-new self-service stations, which, after further inspection, I find are essentially useless. You can buy stamps from them, but you can also buy stamps from grocery stores and bodegas painlessly. You can also buy postage for larger packages, but the in-house drop box has a weight limit of 16 ounces. Since I am trying to ship something of significant size, it’s inevitable that I join the chain of people waiting miserably. As I stare at the backs of their heads, I begin to feel the toxic tension radiating from deep inside many of them. Knowing that I might leave with a rare form of cancer (or, at the very least, a gastrointestinal defect) I hunker down and prepare to brave the storm.

Behind the counter, three ladies lethargically assist the customers. I look away for a moment, trying to distract myself from the tragedy at hand. However, as if it were a 14-car pileup, I glance back over and notice that two of the ladies have disappeared. Now standing in line for about 10 minutes, I have come to realize that I’m moving slower than John Goodman on horse tranquilizers. Not cool. An elderly woman in front of me spots a USPS employee walking through the lobby and tells him, “I’m going to send my cards by email next year!” The man gives her a smile of indifference and walks away. As I slowly make my way toward the front of the line, a woman behind me talks about calling and reporting the post office. Call away, honey. They clearly do not care. A younger woman gets called up to the window and, after waiting in line for an eternity, is told that she used the wrong form. The sole woman behind the counter instructs her to step aside and fill out a different form. Poor bastard. The elderly woman gets called up and I am next. Finally!

Grandma approaches the glass window and immediately tells the lady behind the counter that the post office gets more and more inefficient every year. The woman fires back, “That is your opinion. You’re lucky I came to work today.” Did you hear that, geriatric client? You are lucky that this independent organization within the U.S. Government hired this woman to show up for work and be a sickening, inefficient waste of human life. She is actually lucky that she sits behind a glass wall, or her life would be in grave danger. During this interaction, my mind wanders off and I slip into a coma. A woman reappears behind the counter and I awake when the entire line lets me know she has returned.

My brain begins to reboot as I make my way forward. All I need to do is send the package I am holding in my hand by Standard Mail. That is it. I open my mouth for what seems like the first time in my life. I say, “Hi, I would like to ship this by Standard Mail.” I hold my breath, knowing that the simplest of requests can be the most paramount around here. She says, “First Class, Priority or Standard?” Well, didn’t I just say Standard? I reply, “I want the cheapest.” Oops. That was a mistake. Stupid self! You just made this more confusing for her. She stares at me blankly. I say, “Standard is the cheapest, right? Just ship it Standard.” She begins to type things on a computer that looks like a prototype from Bill Gates’s college dorm room. My eyes are fixated on her movements. Wait! Could this be? She has printed the postage and is now giving me a total to pay. I pull out cash, knowing that pulling out plastic could lead me to committing mass murder. I pay the woman and she hands me a receipt.

I bolt for the front doors. I attempt to leave through a locked door. Fooled again! I scramble and try another as I fantasize about the outside world. This one is unlocked. I get outside and immediately take in a big gulp of air. Yes, the 14th Street air tastes like piss and carbon monoxide, but I’ll take it over the stale air that hangs in the place I just exited from. I have to hold back the tears that are ready to stream down my face. I am alive again. I have been reborn. As I channel Sandra Bullock at the end of “Gravity,” I become very upset that I am not eligible for any awards after what I just went through. Now, it’s off to lunch to reward myself.