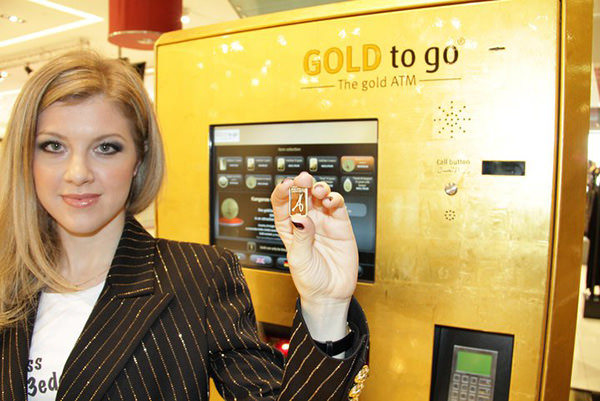 The age-old vending machine just got a fresh, sexy makeover — not to mention a noble new purpose. It’s all thanks to an innovative little food company with a big idea called Farmer’s Fridge. Founder Luke Saunders, 27, had the brilliant concept of offering healthy, daily-made salads right out of a refrigerated vending machine. Yep, those leafy, green machines — good-for-you real food — can now be out-of-a-machine convenient, too!

Where the Revolution Started

Just six weeks after launching its first-ever refrigerated vending machine in a Chicago food court, urged on by popular demand, the food company has now opened its second automated salad seller at the Lake Forest Tollway.

OK, easy there, New Yorkers. I know we’re used to being health-innovative first adopters. We’re next on the list, according to Saunders. “We really want to be there,” says Saunders, who’s originally from Basking Ridge, New Jersey. The company strategically put its first machine in downtown Chicago — in a food court — where there were no other healthy food options. And, as the company had hoped, the shoppers gobbled up the goodness. “The response has been amazing!,” says Saunders.

The agenda here is offering foods packed with organic, local, nutrient-rich ingredients in environmentally friendly BPA-free plastic jars (hmm, transparent? we like that concept). Just grab a fork and go. Plus, the layered, stacked salad-prep technique guards against sogginess, keeping the fruits, vegetables, grains, nuts, seeds and other ingredients crisp and vibrant.

How Does It Work?

Thought it couldn’t be done? Well, Saunders saw a massive gap in the food industry. While traveling and on the go, his gut told him he wasn’t the only one craving healthier “fast-food” options. With his strong manufacturing background, Saunders put two and two together and realized making this much-needed concept a reality wasn’t rocket science. “No one had connected the food and vending and fabrication dots.” The entrepreneur says he was thinking on the idea for two years, while his wife pursued her career as a lawyer.

In the end, it just came down to stellar time management, or what I like to call methods and systems. Each weekday, a small crew gathers at 5 a.m. to chop up and package the produce, whipping up salads, nutritious snacks and breakfast bites. (Well, it took smarts, too, to understand that layering the food would keep it fresh, and that the lowest acidity items had to be on bottom, etc..) The goods are delivered and loaded into the machines around 9 a.m. Whatever’s still there the next morning goes to local food banks (hmm, did they get that idea from another of our fave “fresh” enterprises, Pret A Manger?) “It’s just part of the morning delivery route,” says Saunders.

The company’s linked arms with SPE, a certification company, to ensure high quality in its food offerings, which contain whole grains, veggies and lean proteins. Want even more of a protein punch with your salad? Easily add chicken, tuna or salmon. “There’s a reason nobody’s done this before,” says Saunders. “It’s really challenging, getting the operations part down.” Still, Saunders seems to have figured it out.

The best part? You can get a protein-packed salad for $7 (and yes, dears, plastic is accepted). Going by ever-popular Just Salad’s prices, where one salad can easily put you back two digits, or those airport iceburg-lettuce salads, typically running at least $10 and not mason-jar-layered fresh, that’s a real steal. (Psst, hit the vending machine after 6 p.m., and you’ll get a $1 discount). All around genius, we say! Um, so can you plug one into our building pronto, please? And everyone working on the team, I hope you’ve negotiated a fat chunk of stock options (big wink).