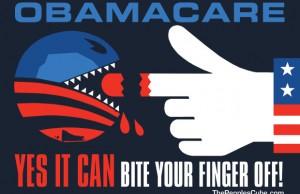 Obamawho? Obamawhat? Obamacare! According to new reports, it’s actually costing billions of dollars less than Republicans had whined about. Like, actual billions. Not “oh a billion dollars” ballpark figure — like, several billions of dollars cheaper than the GOP had “anticipated.” This is because the GOP is a largely racist entity designed solely to divide the nation into two screaming, squabbling kinder-states. Or something. Boy I need coffee today. The New York Times reports:

“Over the next few years, the government is expected to spend billions of dollars less than originally projected on the law, analysts said, with both the Medicaid expansion and the subsidies for private insurance plans ending up less expensive than anticipated. Economists broadly agree that the sluggish economy remains the main reason that health spending has grown so slowly for the last half-decade.”

As was reported on TheBlot a while ago by yours truly, the subsidies take out a huge portion of the overall cost of the Affordable Care Act. What Healthcare.gov basically does is present you with a marketplace for other places to buy insurance based on your income. It’s pretty effective, and totally works. The current system allows the hospital’s prices to be dictated by the major insurance companies as well as medical machine manufacturers and a myriad of other shadowy figures.

Don’t believe me? Then why does a hip replacement cost just $350 to manufacture but $20,000-$35,000 in the hospitals for the end users? Ha cha chaaaa. Capitalism at its finest, folks! Squeezin’ every penny out of the little guy.

Fox News — which isn’t actually news about foxes (boo!) — has something to say about Obamacare: namely that it is an affront to American values! Why, of COURSE we should just be allowing people to die in the streets! Fuck you, I’ve got mine, buddy! Just take a look at this crazy video to see what I mean. Insanity, right? Who’d have thought that “people not dying” would have so many (arguably insane) people up in arms? It’s that kind of mentality that is holding back humanity from actually doing something great … and is proving as fruitless as an inner-city supermarket.

The NYT goes on to say that the ACA will actually save people a staggering amount of money … around $190 billion per decade, actually.

“One study by the liberal Center For American Progress, for instance, found that an average individual premium for a plan with relatively high out-of-pocket expenses in the insurance marketplaces is $3,900, about 16 percent lower than the $4,700 expected. If those savings were to stick, the Affordable Care Act would cost about $190 billion less than expected over the course of a decade, the center estimated.”

With those kinds of savings you’d have to be crazy not to go along with the ACA, but the GOP are fighting tooth and nail to make sure that poor people die alone in unlit and unheated holes. Yes, dear reader, it’s sad but true. But then again, so is my bank account this month. Ho hum.