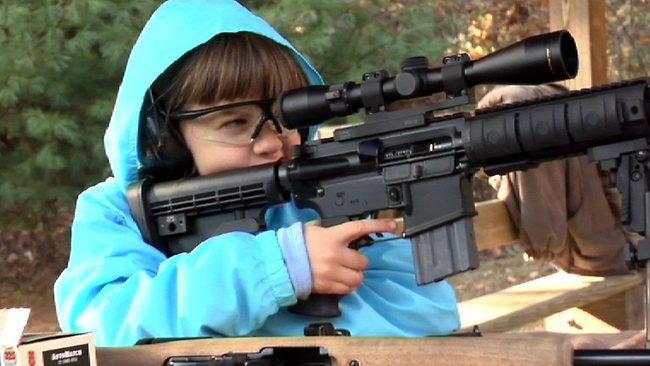 The National Rifle Association has a brilliant idea.

If — if — we take a guy in a black T-shirt and smarty-pants glasses and throw in some info graphics, whatever he says will sound oh-so-smart. Oh! And he has that beard, too!

Well, the end product is the charming video below entitled “Everyone Gets a Gun,” presented by the NRA’s Billy Johnson. Note the not one but two serious head tilts at mark .09-.13. Yeah, this guy is so smart he can’t decide on which direction his head should be titled toward. The main point of the video, instead of “gun-free” zones, we should instead have “gun-required” zones.

From the beginning until about the 2:30 mark, if you can bear it, is just the smarty-pants glasses-wearing Johnson spouting off a bunch of nonsensical phrases (“We don’t have a gun policy in America. We have an anti-gun policy.” Well … yeah.).

But after that, he gets to it. “Why don’t we introduce young people to guns early?” Building on this, Smarty McBeardglasses goes on to say that “we would teach shooting and firearm competency,” going on that “it would matter if they didn’t want to learn. We would make it necessary to advance to the next grade.”

Oh, Jesus. Picture the NRA-endorsed classroom with me.

“I’m sorry Susie, but your proficiency with that .38 Special was not up to our 5th grade standards, and you’re going to have to repeat the 4th grade. Good news — you get to read ‘The Giver’ again.”

“Everyone, take your seats. Busy day ahead. First up music, recess, then sharp shooting. Did everyone remember their night-vision goggles?”

All of this is presented without mentioning school shootings directly. But, honestly, that’s what we are talking about here, right? The NRA came under intense criticism after Sandy Hook, with many Americans viewing the gun-rights groups as out of touch and, well, nuts. And videos like the one above certainly won’t help that image. But is the video suggesting that if kids knew how to use guns, and maybe had guns, school shootings could be prevented? I’ll give you a moment to roll your eyes back into the forward position.

Johnson goes on to suggest that since the government subsides pesky things like food, it’s only logical that they subsidize guns as well. “I mean, perhaps we would have government ranges where you could shoot for free or a yearly allotment of free ammunition,” he said. “Gun policy, driven by our need for guns, would protect equal access to guns, just like we protect equal access to voting and due process and free speech.”