Psychic and physical pain has led to some of the world’s best art. Famous pain sufferers include mentally tormented Vincent van Gogh, Frida Kahlo, who shattered her pelvis and vertebrae when she became impaled during a bus accident, and Edvard Munch, who endured unimaginable psychic and emotional trauma. There’s even a website dedicated to contemporary art created by those afflicted with pain.

But what about the artists who create physical pain in the name of art — isn’t that a bit of lunacy?

Chinese performance artist He Yunchang, 47, outdid himself with “One-Meter Democracy,” his controversial work of “art.” Under the supervision of a doctor, Yunchang was sliced open one meter (3.3 feet). The incision went from his collarbone along his torso, then across his thigh and ended at his upper calf. He filmed it. Then he voluntarily had a nine-inch rib taken out of his chest. He saved the bone piece so he could wear it afterward as a necklace. The rib sits between two gold dragonheads biting down on it from both sides. Lovely. I bet his mother was so proud.

“I keep things under control,” said Yunchang. “It is important that I do not let myself die.” He endured the slicing “performance” without any anesthesia. He has also stared at 10,000 glaring watts of light bulbs to damage his eyesight, been encased in a cube of concrete for 24 hours, and he’s burned his clothes while wearing them.

Our next nut-job, err, artist is a painter born in New York City’s Hell’s Kitchen, Vincent Castiglia, 32. His Facebook page calls him an “Existential Visionary Artist.” In my opinion, his paintings are masterfully drawn but depict the stuff of nightmares. I’m not sure where in a person’s home the paintings should hang. They are disturbing brownish-red images of half-bone, half-flesh demons, cripples and other figures with twisted limbs and in various stages of decay. Ooh, yummy!

But here’s the really creepy part: The paint he uses is blood. Alone in his studio, he extracts the liquid from his own veins. At last count, the artist has used up to 12 pints of it.

“My work is literally a blood sacrifice on the altar of art,” said Castiglia. Yeah, whatever, but ew. Castiglia has, however, won international acclaim, and his paintings reside in many museums and private collections. Even Gregg Allman of Allman Brothers fame is the proud owner of “Gravity,” one of Castiglia’s most celebrated paintings. Writer Jovanka Vuckovic summed things up well when she said, “In a sense, they’re not paintings, they are hemorrhages.”

Artist David Catá has gained a lot of attention for his portraits. They are quite good, but the reason I’ve included this artist is for the method he uses to create them. With needle and thread, Catá stitches the portraits into his hand. “It is essential for me that the portraits are sewn on the palm of my hand because this represents the link I have with these people,” Catá said, “and how they leave their print on me after their passing through my life.” Catá’s view is that all of the people we know make us who we are. Even after they’ve gone from our lives, they leave memories like footprints. Catá has filmed the act of sewing the portraits into his hand, ripping the portraits out of his palm and then offers a look-see at his mutilated skin afterwards. What fun. Not.

Watch Catá sewing a portrait into his hand: 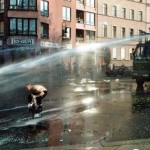 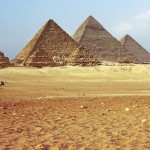