YET ANOTHER DAMN FOOL IDIOT FALLS ASLEEP DRIVING A TESLA

Tesla’s are cool.  Like, they are way cool.  They’re great cars.  The company is definitely non-traditional when it comes to the car industry.  And they are great, cool modern cars.  But they are so modern in some ways that contemporary idiots haven’t figured out how stupid they really are.  But here we have one instance where the contemporary idiot was front (but not center) in the driver’s seat, asleep for all to see.  On the highway.  With other people.  Why was he asleep?  Because Tesla has an autopilot mode.

TESLA AUTOPILOT IS AN IDIOT’S HIGHWAY STRAIGHT TO HELL, DO NOT PASS GO

So what’s the problem?  The Tesla autopilot is a driver assist, NOT A DRIVER REPLACE.  So this idiot literally put himself and everyone near him in mortal danger.  No, that’s not an overstatement.  He could have gotten a lot of people killed.  Because this entitled asshole was asleep at the wheel.  Because the car he can afford has an “autopilot” for him to nap.  Asshole!  That’s not how you drive your Tesla Model X.  The photo is from an anonymous driver who was on the road away from Las Vegas.  Since he had already left Vegas, this does not violate the rule.  What happens in Vegas stays in Vegas.

REAL CAR AUTOPILOT STILL FAR OFF IN THE FUTURE

Tesla has their hands full fulfilling orders for their cars and trying not to look to douchie with their crappy labor relations.  So this doesn’t make them happy, either.  But they really don’t want anyone to be driving their cars like this.  Or, maybe a better way to say it, NOT driving their cars this way.  This “autopilot” is really what we call Level 2 Autonomy.  Maybe.  That’s not self-driving.  It’s the sort of thing you can relax a little with on the road.  But you’re supposed to be there to react to anything that might happen.

But not asleep behind the wheel.  This isn’t even the first time! 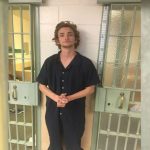