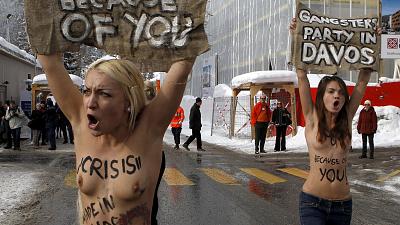 Every year, the great and good assemble in Davos, Switzerland, to tell themselves what a swell bunch of guys and gals they are and to pretend that they are intellectual heavyweights. I find Benjamin Bratton’s description of TED fits Davos as well: a “middle-brow megachurch infomercial.” Still, I know a few genuine intellectuals who attend, and discussing serious affairs even at a high school level is never entirely bad. This year, we learned:

Iran has rejoined the global economy. Iranian President Hassan Rouhani turned up for the thing this year. We haven’t seen an Iranian president at Davos for a decade. The Iranian regime is playing nice on its nuclear program as well. But it’s going to take a while for all of this to turn into anything the business world can use. Being the first company in an industry back in Iran may look good, but as we learned in settling the American West, pioneers have a very high attrition rate.

Davos has loaded up on warm, fuzzy nonsense. There was a mindfulness meditation program. There was a discussion of the “sharing economy.” Moreover, there was an authenticity panel. Apparently, Davos is running a remedial course for those who failed to watch “Mr. Rogers’ Neighborhood” when they were kids.

In a discussion of technology and jobs, there was the usual back and forth over whether technology destroys jobs or creates vast, new horizons for employment. Google’s Eric Schmidt claimed, “The jobs problem will be the defining one of the next 10 to 20 years.” Here is a mistake of such huge proportions that I am tempted to stop using his search engine — jobs aren’t the issue.

Income is the problem. Properly distributed, there’s enough money in the world for everyone to live rather well. Using purchasing power parity as a measure, per capita Gross World Production was $12,400 in 2012. For a family of four, that’s $49,600. That’s only a couple grand shy of America’s median household income. So if Schmidt and his fellow billionaires participated in a “sharing economy,” poverty would be gone. Of course, they’d be less fabulously wealthy, so that isn’t about to happen.

Schmidt and a few others also worried that the U.S. was at risk of becoming a police state. I have been to real police states. I don’t think the U.S. has the organizational capacity to become an effective one. But there was Schmidt saying, “ Just because you can do this monitoring doesn’t mean you should do.” Coming from one of the Google crowd, that may be the best joke of all. At least when the NSA steps out of line, I can complain to my congressman. Who elected Google?

Then there is the relationship between Japan and China. It’s a troubling thing, and Japanese Prime Minister Abe told journalists that the situation was similar to the Anglo-German relationship before World War I. He added that China’s defense spending was a provocation. We all know who ultimately won the British-German conflict — that’s right, America.

I have been to several global conferences myself, and the actual sessions are tedious as all get out. They exist as a pretext for people to sell books or make backroom deals, to sign contracts and make contacts. I suppose the skiing in Davos could be worth the trip, but as a Colorado boy, I can tell you the Alps are a lot icier than the Rockies. And Switzerland is a charming country that is always in the running for Olympic gold in boredom.

I didn’t make it to Davos this year, but that’s OK. I can miss it again next year.