The premise of “Fading Gigolo” hooked me immediately. John Turturro plays a male prostitute and Woody Allen plays his pimp. It seemed impossible for this setup to fail and much of it is hilarious. However, the second half has some lead-like moments.

Turturro wrote and directed the film. I’m a huge fan of Turturro’s acting, but I fear he needs a tad more experience wearing those other hats. The strengths in the film lie in the star power, with the biggest spotlight on Allen’s perfect performance. (Let’s save Mr. Allen’s highly publicized family troubles for another article.) Woody wows in his role as Murray, the owner of a fading, folding Manhattan bookstore.

Turturro’s character Fioravante comes across as a quiet man weighted down with depression. Turturro’s face was so convincing that my heart ached for him. His loneliness and obvious disappointments in life were palpable. But that wasn’t funny, just sad. During the second half I wanted to shake Turturro to get more life out of him.

“Fading Gigolo” is really two separate films. Both stories are strong and compelling but one is a comedy and the other a drama. The comedic story that the movie trailer advertised works for the most part during the first half, and that’s 99 percent due to Allen.

Comedy is often crafted from life’s most painful aspects, but in this film I think the script just wasn’t ready. Turturro would’ve been wise to work on it a year longer and hire some great editors, maybe even Allen himself, to rewrite parts of it.

All of that said, I’m very glad I saw the film and I did enjoy it.

Murray (Allen) is the world’s most unlikely pimp, but he needs money and accidentally lands an opportunity. He can pull in $1,000 dollars by pimping out his florist friend Fioravante (Turturro) to provide a “ménage” for his dermatologist (Sharon Stone) and her sexy friend Selima (Sofia Vergara). Once propositioned, and after much cajoling, Fioravante finally agrees to the arrangement and successfully negotiates 60 percent of the money, at which point Fioravante tells Murray, “I’m your ho.” Turturro delivered that line deadpan and it was one of the most humorous moments in the movie. Don’t worry, that’s not a spoiler; it’s in the trailer.

Stone and Vergara were not used to their full capacity. With their talent they could’ve brought raucous humor — if only Allen had written the script. Instead they are beautiful, bland and background.

The movie turns into something else entirely when the fragile Hasidic widow Avigal (Vanessa Paradis) becomes a customer. Paradis is best known as Johnny Depp’s now ex-longterm love and the mother of his children. Here she gives a stellar and sensitive performance for every second of her screen time. She was so compelling I would’ve liked to have seen her storyline as a feature-length drama.

It is bittersweet to watch Fioravante fall in love with Avigal knowing the relationship could never be. Liev Schreiber does a fun schtick as Dovi, a Hasidic cop who is desperately lovesick for Avigal. I was impressed that Schreiber could reinvent himself so completely from his sexy high-testosterone role as Ray Donovan. At times he seems so tickled by his part that he might burst out laughing, which is endearing. 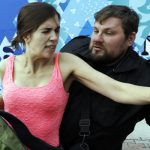