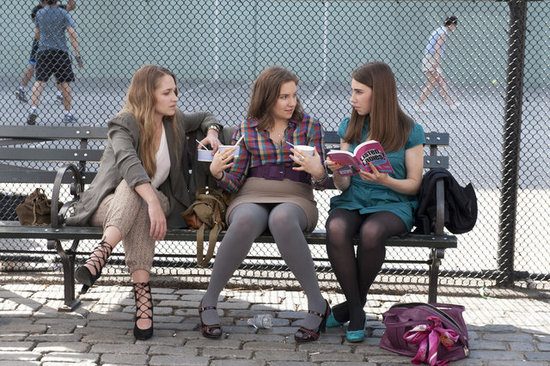 I was once an avid “Girls” supporter. Oh yes, dear reader. There was a time, long ago, when I would prepare for my weekly dosing, jar of Nutella in hand. A simpler time. I was just a self-involved, 20-something Brooklynite, delighted by the opportunity of watching four self-involved, 20-something Brooklynites frolicking about Greenpoint, where they totally and absolutely could not afford to live. It would be just like my life, I imagined, albeit with a great deal more crack, and a handful more opium. And I did enjoy the first season; I was excited to talk about it the next day, I wanted to scour the interwebs and see what everyone else thought, I wanted to throw all my cares to the wind and dress myself in unflattering rompers like a real-life Hannah Horvath! Also, I wanted to touch Charlie inappropriately. I wanted to live, basically. But then the second season aired, and after suffering through 10 episodes of blood-boiling what-the-fuckery rage, I had to throw something in that wind, and that thing ended up being any chance of me ever watching “Girls” again.

Sometimes, you have to know when to walk away. And I, a person who has watched every single episode of “True Blood,” know when it’s time for me to throw down the reins, or whatever (which is not to say that I’ve walked away from “True Blood” yet, but that’s because I love me some Alcide and all the cashmere sweaters Bill wore last season). I’ll have you know, reader, that I have more than a few issues with “Girls,” and despite what people may tell you, literally none of them have to do with personal feelings about any of the “actresses” on the show. I’m not upset that nobody is usually really acting, because in scenes that don’t involve weeping, the non-acting lends an almost naturalistic tone … almost. OK, they’re all doing average, which is all I can ask for. Well, except for Allison Williams. Marnie is the literal worst. And Williams is, of course, on the fast track to overexposure because she thinks we need her in our lives, and because I suppose nobody learned from Anne Hathaway circa the Les Miz years.

But back to the task at hand, and let me give it to you straight. My issues lie within the show itself, because a half hour of tonal shifts that dare to give you a Lucille-Ostero-level of vertigo is not something that I’m interested in.

I think it’s important to recognize that “Girls,” first and foremost, operates on the level of spectacle. Watching the show on Sunday nights, politely siphoning off HBO Go from an unwitting parent, talking about the episode for the entirety of the next day — well, it’s become an inescapable part of the popular culture canon. And that’s a heaping amount of attention for a show that is qualitatively inconsistent and therefore frustrating. The critics still love it, although I’m never sure if that’s because of its self-imbued cultural relevancy, or because it’s like watching animals in the zoo and it’s a means to introduce Middle America to how we do in Brooklyn. We do regular early-20s stuff, Middle Americans! We just all complain a lot! Also, drugs.

Based on how stabby season two made me, and the total sameness of the season three trailers, the show isn’t getting any better. It’s a bit disheartening, because the more praise that gets dumped on “Girls,” the more it loosens its grip on reality. Take the romantic comedy-lite finale, which frankly didn’t make sense as realism or absurdism, because FaceTime does not work without WiFi, and you don’t have WiFi when you’re running from, like, Prospect Heights to Greenpoint or whatever. But also because, what the what? At this point, the show itself is as meandering and unsympathetic as the characters themselves, which is a touch too much for my palate, thank you.

I’m not denying that the show doesn’t have bright spots. Of course it does! And those moments of brilliance can be attributed to Lena Dunham, who lends her characters a definitive voice. But just because Dunham has a strong voice doesn’t mean she’s capable of telling a cohesive story at this point. Considering Dunham is basically a novice at this whole thing, she probably deserves some slack — but then it’s like, don’t give a novice her own show on HBO. She has real responsibility here, and while I believe in her potential, I wish she’d remember to wield said influence properly.

It’s hard because denying myself the show means denying my part in the cultural conversations surrounding “Girls.” I need to be in the know — I’ll read five recaps of every episode of “Game of Thrones” just because I want to make sure I didn’t miss anything. Ideally, I would just be able to shift my expectations of the show, which hasn’t exactly been realistic, but really I just want “Girls” to be worth the hype.

And so, while I love me a bumbling narcissist or four, I’m going to spend my Sunday evenings catching up on “Breaking Bad,” or rewatching every episode of “Scandal” (again), or catching up on sleep or something. I’ll be that rebel friend of yours who is all, “‘Girls?’ Oh I stopped watching that ages ago — back when Charlie was on the show, and beautiful and bearded, and was dating Terry Richardson’s ex-girlfriend.”

*OK, I probably will end up binge watching it in the summer. But I will definitely beat myself up about it, drown myself in wine and self-loathing, etc. That’s what self-involved 20-something Brooklynites do, right?