So I’ve about had it with Wisconsin of late.  First, someone there won the damn ginormous Powerball prize.  But I didn’t buy my Powerball ticket there.  And now there’s this story about a prank gone random panda and someone called the police?  Some people just have no sense of humor.  Or maybe that’s just no sense at all?  This past February, an unidentified man put on a full panda suit and pranked his neighbors.  But even better, the neighbors were out of town and called the police because they saw the giant “teddy bear” on their home surveillance cameras.  Seriously.

NEIGHBORS TOLD 911 OPERATOR IT WAS A GIANT TEDDY BEAR

So this guy, who I kind of have to like, bought a $125 panda suit.  His daughter loves pandas. So he even picked her up from school that day to surprise her.  But he was also watching these neighbors’ dog while they were out of town.  So he donned his panda suit, knowing they would see him on camera from afar.  But that’s when his plan went a little sideways.  So sure, they saw him.  But then they called 911.  A recording of the 911 call went like this.  “It’s a big teddy bear,” said the caller to the police operator.  So the operator asked them to be more clear.  So they said, “Teddy bear…..Honest to God.”

So the Muskego Police Department responded to the call.  Sure, the caller thought the situation was suspicious.  But that’s because no one has ever found a panda bear in the state we know for its badgers.  So this is what the panda man had to say to local media.  “I knew that my neighbors had a security camera set up. And I thought, well, I’m going to make the ordinary extraordinary; I’m going to dress up in the panda outfit.  So just as I was about to pivot up and walk up my lawn, I turn around and I see at least three squad cars with a fourth and a fifth coming.

Eventually, the police confirmed with the prank homeowners that the panda suit man was supposed to be there.  The woman caller later told local media she was grateful her prankster neighbor was looking out for their home and dog.  Well, in style anyway. Hello, Wisconsin! 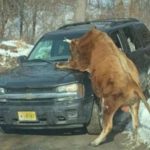 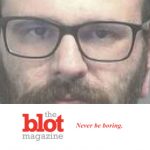