“I’m never writing lyrics like that again! The universe was trying to teach me a lesson, I guess,” Madonna said during the filming of “The Jonathan Ross Show” in London, the day after she fell backward from a flight of three steps at the Brit Awards when performing “Living for Love.”

The lyrics that the pop star was referring are, “Took me to heaven and let me fall down/ Now that it’s over I’m gonna carry on/ Lifted me up and watched me stumble/ After the heartache I’m gonna carry on.” If Kim Kardashian believes she was able to break the Internet, Madonna’s brief fall literally killed it. Pink, Beyoncé, Lady Gaga, Shakira, Kylie Minogue and many other singers have fallen on stage — even Madonna has before — but this fall was so grand and spectacularly disturbing that even fans questioned if it was a stunt. She was literally yanked off the stage when she “failed” to untie her enormous Giorgio Armani cape.

If we take in consideration that Oscar Wilde, back in 1889, opined in his essay “The Decay of Lying” that “Life imitates Art far more than Art imitates Life.” Such anti-mimesis, he wrote, “results not merely from Life’s imitative instinct, but from the fact that the self-conscious aim of Life is to find expression, and that Art offers it certain beautiful forms through which it may realize that energy.”

So, in other easier words, back in 1995, photographer Steven Meisel had Madonna carefully laying upside down on a set of stairs, as if she had fallen backward; this interesting concept was for the first Versace campaign Madonna was featured in. Now, it might be a bit stretch of a coincidence to believe that Meisel and Madonna released that Art energy and that Life captured it — according to Wilde — and reused such energy exactly 20 years later to the horror of millions of fans.

“Everybody was worried that my cape was going to slide off because it’s quite heavy, so they tied it really tight around my neck,” Madonna said about the ordeal. Meanwhile, Armani defended his creation by responding in an interview that “Madonna, as we know, is very difficult. This cape had a hook and she wanted a tie, and she wasn’t able to open it with her hands. That’s all there is to it.” I don’t think this opera will end any time soon …

Either way, this falling scenario reminds me of the work of Italian photographer Sandro Giordano, who in a very original and clever way captures the “downfall of man” in his photographic project “In Extremis (Bodies with No Regret).” Falling, stairs, face in plants, legs in the air, belly flops and drops are the subject of his series that features men and women head-first on the ground, their belongings strewn around them in a visual chaotic mess.

“My photographs are ‘short stories’ about a falling-down world,” Giordano once explained about his thought process. “Each shot ‘tells’ about worn out characters who, as if a sudden black-out of mind and body took over, let themselves crash with no attempt to save themselves, unable, because of the fatigue of the everyday ‘representation’ of living, oppressed by ‘appearance’ instead of simply ‘existing.'” I wonder if he would be inspired to do a shoot version of Madonna’s fall since the pop star tirelessly rehearses and rehearses for her performances. I am not saying she was so fatigued or worn out that she couldn’t undo her cape string, so she let herself crash. Those are the thoughts of Sandro’s work.

Divas will always be divas, even when they fall on or off the stage; some stills of Madonna’s fall are so gorgeous that it actually it looks like a stunning fashion editorial. But a pregnant Mariah Carey takes it to next level when she gracefully falls on stage … after all, the show must always go on. 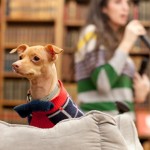 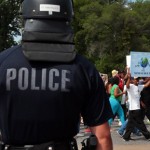