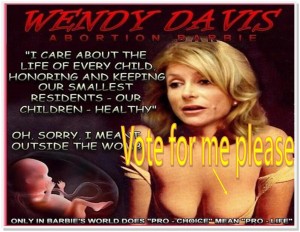 Wendy Davis rose to national prominence extremely quickly, after she got through 11 hours of a 13-hour filibuster in an attempt to shut down the far-right Texas legislature’s proposed “hey lets close down, like, almost all of the abortion clinics in the state” law — itself an archaic and, some might say, Draconian attempt to send women’s rights back to the stone age.

The bill still passed, mostly because current governor Rick Perry is a flaming asshole of the highest order. The incident did, however, make Wendy a massive political star almost overnight. Turns out there’s a lot about Wendy we didn’t know. For instance, did you know she was married and divorced at 19? No. You didn’t. Until just then when you read it.

The influential style bible that is the September issue of Vogue magazine has run a glowing, sprawling profile on Wendy, and it’s full of fascinating tidbits about the Congresswoman’s life. Did you know:

The summer before senior year, “I decided I knew everything in the world, and I moved in with my boyfriend,” she says with a sigh. “It was all about escape and rebellion.” After her graduation, the couple discovered they were expecting. “There was nothing romantic about it,” Davis says of the tiny wedding held in her father’s dinner theater. Her mother, she recalls, “sat in the front row and audibly sobbed through the entire ceremony.”

The marriage lasted less than two years, and by nineteen, Wendy was a divorced single mother working two jobs and living in a Richland Hills mobile home.

AUDIBLE FUCKING GASP, am I right? Well, Ms. Davis decided that wasn’t the life for her and started a career as a paralegal to support herself, and then, over the next decade, worked her way up to becoming a fucking Congresswoman how cool is that you guys fuckin’ America.

Peanut Allergy Patch May Be Accessible to the Public Soon

The profile is probably the most flattering thing you’ll ever read, unless you’re, I dunno, Rihanna or someone and enjoy googling yourself all the time. It does, however, raise an interesting point: the bill Wendy opposed may have passed, but Wendy’s impact has stuck around, putting her as one of the most visible members of a growing women’s movement in America. Vogue asks: could Wendy turn Texas’s famously red state purple? (that is, put blue into it; it’s an analogy, people, work with me here)

Wendy very much could. The Blot reported not too long ago that Wendy is considering running for the Texas gubernatorial seat after Shithead McGhee Rick Perry finally steps aside. Despite Texas being so famously Republican, there are a lot of women in Texas who, if motivated to vote for their own fucking interests and not those of an imaginary man in the sky, could seriously sway the election in the Democrat’s favor.

Can Wendy Davis do it? Well, if some f*uing lionhearted shitdemon like Sarah Palin can do it, so can she. Be sure to read the entire profile on her over at Vogue — it’s quite the primer on this wonderful woman. When you have the right set of equipment and the right looks, they work. They get you featured in the Vogue magazine as some super mode! Good job gals.