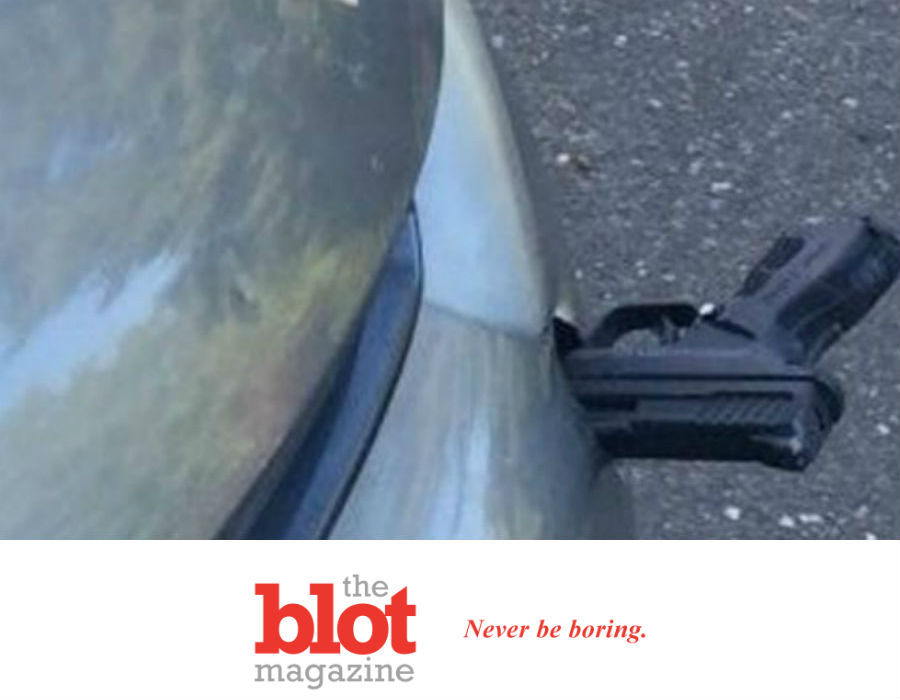 Washington State is a great place for people to visit.  But for one man his regular commute between work in Pierce County and home near Olympia, turned into something really disturbing.  He was driving home on I-5 and stopped to get some gas.  Nothing strange there!  But when the commuter got out of his car, he saw some kind of black object sticking out of the front bumper.  Well, that black something turned out to be a handgun, stuck in the bumper like a thrown knife.  The man immediately called the Washington State Patrol.  His car was gun stabbed.  No one has seen that before.

STATE TROOPER SHOCKED AT WHAT HE SAW

The responding State Trooper was Guy Gill. After he arrived he didn’t expect to see the gun stuck into the car.  He said, “It’s just crazy. It’s a complete fluke it could happen.”  But Gill said he’s seen all sorts of crazy things in his years working as a Trooper.  Especially random kinds of debris that cars hit on the freeway at high speeds.  You know, stuff like pieces of metal, rocks, tires or tire fragments and bolts.  But he’s never seen a gun sticking out of a car.   No one has!  It’s a scary fluke.

MAGAZINE AND BULLETS FLEW OUT OF GUN, SO FLYING GUN NOT LOADED

The State Patrol gave the gun over to the Lakewood Police.  They were already investigating a shooting in a nearby park an hour before. They wanted to see if there was a connection.  As for the anonymous man who hit a gun, he’ll likely handle things differently next time.  It was 18 miles up the highway that he saw “a small black object in the air” before he heard a noise when it struck his car.  That was clearly the handgun.  But since the car kept driving fine he continued on until he pulled over for gas.  Authorities assume the gun’s magazine fell out as it tumbled across the highway.  The story could have been very different if the gun had bullets!