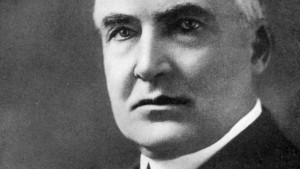 Warren G. Harding wasn’t the worst president the country every had, but he was far from the best (I figure 40th out of 44). However, he does get points for being colorful. He once lost the White House china in a poker game. He appointed a load of greedy cronies to high office (Teapot Dome was a major political scandal that happened on his watch). And he had a mistress of many years. This week, the Library of Congress released a collection of their love letters, and from them, we learn a great deal about our 29th president that we didn’t know before. For instance, he named his penis “Jerry.”

Warren (and Jerry) lived in the White House only a short time. Inaugurated on March 4, 1921, he (and Jerry) died on August 2, 1923. His wife Florence, five years his senior, was the brains behind the Harding political machine, and while noted for her alcohol-fueled White House parties during Prohibition, she was a strong advocate for things like the League of Nations and women’s rights.

Carrie Fulton Phillips and her husband James were friends of the Hardings around the turn of the 20th Century. Warren (and Jerry) and Carrie went at it like rabbits, including when the couples toured Europe together. This wasn’t the first time Warren (and Jerry) had cheated on Florence with a woman she thought was her friend, but it was the most embarrassing when it became known. To let the marriages recover, the Phillips family went to Europe again while the Hardings stayed in Ohio. While Carrie was in Europe, Warren (and Jerry) ran for and won a U.S. Senate seat, and as war approached in Europe, she returned. Then, she and Warren (and Jerry) reignited the affair.

After Warren (and Jerry) got the Republican nomination in 1920 for the presidency, the candidate told the party bosses about the affair and the countless letters she had sent her, some even on Senate letterhead. To hush it all up, the Republican bosses agreed to meet Carrie’s demands (she rejected their first offer). She got an extended tour of Asia and the Pacific Islands and a stipend for life. She is, to my knowledge, the only person to ever successfully blackmail a major American political party.

Now, the love letters are available to us all. Before getting into the steamy smut, I will warn you that Harding wasn’t Hemingway. As his contemporary H.L. Mencken said, “He writes the worst English I have ever encountered. It reminds me of a string of wet sponges; it reminds me of tattered washing on the line; it reminds me of stale bean soup, of college yells, of dogs barking idiotically through endless nights.” I believe Mencken was being kind, but judge for yourself.

We’ll start with just the embarrassing, “I love you more than all the world and have no hope of reward on earth or hereafter, so precious as that in your dear arms, in your thrilling lips, in your matchless breasts, in your incomparable embrace.” OK, not too painful. Thrilling lips was a promising turn of phrase, but like a teenage boy, he had to hurry off to the breasts.

Moving on, “Three weeks ago [this robe] touched and covered your beautiful form, and that made it hallowed to me, and I wanted contact with it, to make me seem nearer to you, and I wanted to sit before the fire afterward, in freedom of dress, and dream of you and of loving you, intimately.”

I realize that those of us who still write letters don’t really edit them, but the run-on sentence here just makes it read like, well, verbal diarrhea on the page.

This is just bad. “If I had you today, I’d kiss and fondle you into my arms and hold you there until you said, ‘Warren, oh, Warren,’ in a benediction of blissful joy.”

But this is worse: “Wouldn’t you like to get sopping wet out on Superior — not the lake — for the joy of fevered fondling and melting kisses? Wouldn’t you like to make the suspected occupant of the next room jealous of the joys he could not know, as we did in morning communion at Richmond?”

In a poem, Warren (and Jerry) wrote, “I love your poise / Of perfect thighs / When they hold me / In paradise / I love the rose / Your garden grows /Love seashell pink / That over it glows.” I believe the correct reply is “Ewwwww!”

Finally, if you don’t believe me that he named his guy parts “Jerry,” well, John Oliver proves it in a way that only he can.

Bill Clinton was an amateur womanizer by comparison. 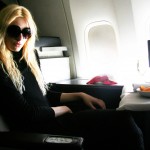