Sarah Funk is a travel vlogger.  So for some of you born in the 1940’s that means video blogger.  Funk posts most of her video travel blogging to YouTube.  She goes all over the place and shares her discoveries and experiences.  But this time, it feels a little different.  2 years ago, Funk and her partner snuck into Cyprus’s Mitsero Red Lake.  It was a surreal and spooky site.  Her partner even joked, “This is what murder episodes are made of.”  So yes, you were pretty close to the mark.  But it was actually where a serial killer dumped the bodies of his victims.

Read More: Like Economy Class? Here Are the Best Hacks for a Traveler

Mitsero Lake is one of those industrial creations.  A copper pyrite business dug out the area, leaving this crater after it left.  The crater then filled with water.  But all the acidity from the mining operation turns the water a crazy, unnatural red.  But this unnatural wonder has become a bit of an off-Broadway type tourist spot in the last few years. Plus, it’s somewhat remote.  So it was also the perfect spot for a serial killer do dump the bodies of his victims.  So as you can imagine, it’s a little weird to be a vlogger and realize your video footage is evidence and could even be the body of a murder victim.

In late April, an army captain in Cyprus finally confesed to the murder of five women and two children.  His name is Nicos Metaxas.  He told authorities that three of the bodies ended up in the Red Lake.  So far, police have found one of the bodies, contained in a suitcase.  They also found one other suitcase.  But neither of the other two bodies.  So that means that Funk’s videos and photos of that warped box in the water just might have held a dead person inside.

Oddly enough (or not), in one of Funk’s videos on-site, you hear her say “I just feel death in the air,” as you see the camera focus on what we know was a serial killer’s suitcase. 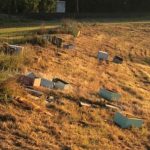 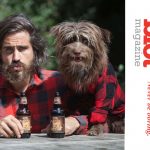