“American Sniper,” a film starring Bradley Cooper that is based on the life of Navy SEAL Chris Kyle, is a very different movie depending on whom you ask. To some, it’s a meditation on a troubling war with an underlying anti-war message. To others, it’s a stirring, patriotic work celebrating American bravery on the battlefield. Some critics believe the film makes a hero out of a ruthless killer who tends to stretch the truth — and even lies on occasion.

How can one movie, which is a phenomenal box-office success, be so many seemingly contradictory things to so many different people?

Well, first off, art is subjective. We all approach a film through our own filters, prejudices and notions of how the world should and shouldn’t be. More importantly, I believe, especially in relation to a movie like “American Sniper,” is the question of how we judge our heroes. Should they be moral men and women reflecting the humanistic values of a majority population that is not actually fighting in its nation’s wars, or should they be people who find a way to excel in their jobs — many of which fall outside the civilian norms of right or wrong — that a democratic country has sent them out into the world to do?

An article in The Guardian newspaper labeled Kyle as a “hate-filled killer,” wondering why “simplistic patriots” were treating him like a hero. A piece in Slate designated him an “American Liar,” based on former SEAL Jesse Ventura’s defamation suit against the Kyle estate (in his book, Kyle claimed he knocked Ventura down in a SEAL bar), which Ventura won. Other critics have complained that “Sniper” is a jingoistic film that fails to tell the other side of the story (the Iraqi side), while still applauding director Clint Eastwood’s style, Cooper’s performance and the core story being told.

Chris Kyle saw the world in terms of good and evil and, like all men on Earth, had some serious flaws. Yet the Pentagon backs up his war record (160 confirmed kills), and he did serve four tours in Iraq, supporting his brothers in arms. Still, critics and pundits are divided: Is “American Sniper” the story of a cold-blooded killer, or a hero?

Judging a job, and film with a central character whose success depends on the ability to kill without hesitation or remorse, is a tough chore. Perhaps Kyle, and a film devoted to his life, shouldn’t be judged by the humanistic standards we tend to measure modern civilization by. War is what happens when diplomacy and civilized behavior break down, and we start shooting at one another.

Humanism, and subtle areas of gray (enemy = human being, too) ought to start with the people (that means you, voter), and the nation that decides to send snipers to dubious wars in the first place. Once the soldiers get there, more often than not, their job is to kill — as politically incorrect or unsettling as that fact might be. Heroes with battles and wars to wage, like Abraham Lincoln (proposed deporting blacks to Africa), George Washington (owned slaves), Winston Churchill (a hard drinker) and Martin Luther King Jr. (an unfaithful husband) had deep flaws as well, yet these inconsistent men were still heroes in the fields they chose to fight for.

“God, family, country” were the values that guided Chris Kyle’s life, despite what other bullshit might have been rattling around inside his head, or he chose to talk about on the side. The Navy trained him to kill, and he was very good at his job. While his worldview might not mesh with yours or mine, if you were going door to door in a hostile country (regardless if you should be there or not), you probably would have been extremely grateful for someone like Kyle with his sniper rifle and deadly skills watching over you from above.

“American Sniper” paints a singular portrait of a man and the beliefs that spurred him on, and in doing so, tells a story that is many different things to different people, depending on who is watching. 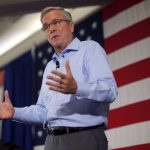