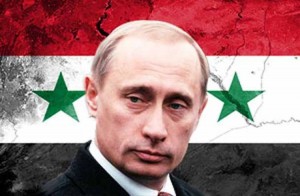 Has Vladimir Putin lost in both Crimea and Syria? Critics say he has. In Europe, the real casualty is Ukraine, lost out to both EU and Putin. To hear the hawks in Washington and elsewhere tell it, Vladimir Putin has not only won in the latest confrontation with the West, but he has also done it in a most embarrassing way. He’s been emboldened, and it’s like Munich 1938 all over again — blah, blah, blah. And if all you’re looking at is Crimea, I can understand why you would misperceive the situation. However, we need to look at things from a grander perspective. On Friday, March 21, Putin lost Ukraine.

A little history first. On March 30, 2012, Ukraine initialed its EU Association Agreement, a deal lots of non-EU nations have signed on their way to membership. The Rada, Ukraine’s parliament, was working to meet the requirements of the deal. President Viktor Yanukovych was actually pushing for the EUAA. At the same time, he was trying to “find the right model” for working with the customs union of Russia, Kazakhstan and Belarus.

On November 25, 2015, President of the European Commission José Manuel Barroso made it clear that “one country cannot at the same time be a member of a customs union and be in a deep common free-trade area with the European Union.” In other words, Yanukovych had to choose. Moscow had made it clear that going ahead with the EUAA would be a problem, even calling into question the territorial integrity of Ukraine. Yanukovych eventually chose Russia, and his people kicked him out of office. Russia then made its moves to annex Crimea.

Last Friday, Ukraine’s interim prime minister, Arseniy Yatsenyuk, signed the political provisions of the EUAA, and after the May 2014 elections in Ukraine, the Ukrainian government will sign the rest of the EUAA. Yatsenyuk said,“We want to be a part of the big European family, and this is the first tremendous step in order to achieve for Ukraine its ultimate goal, as a full-fledged member.” This happened the same day that the upper house of the Russian parliament voted to annex Crimea.

The EU issued a three-page “Conclusions on Ukraine” hours earlier, and the second paragraph read: “The European Union and its Member States are committed to sign the remainder of the Association Agreement and Deep and Comprehensive Free Trade Area, which together with the political provisions constitute a single instrument. The European Council agrees that the first meeting in the political dialogue as envisaged under the Agreement should take place in April. The European Council urges the Council and the European Parliament to swiftly adopt the proposal for temporarily removing customs duties, so called Autonomous Trade measures, on Ukrainian exports to the European Union.”

In other words, Ukraine has gone ahead and done what Putin didn’t want it to do. Putin wanted all of Ukraine in his customs union; what he got was sovereignty over Crimea, the most pro-Russian part of Ukraine. The rest of Ukraine will tilt toward Brussels rather than Moscow.

He has also ensured that there is never again a pro-Russian government in Kiev. After all, Crimea was one of the most pro-Russian spots in Ukraine, and now, those voters won’t be part of the Ukrainian electorate. Consider how the Republicans would do in America if Texas became part of Mexico. Had Crimea remained in Ukraine, there was a chance of putting together a pro-Moscow government. After all, President Yanukovych was freely elected relying on the votes from the east and south, including Crimea. If the same election had not included Crimea, he would have lost. And the ill will Putin has created means there are fewer people in the western part of Ukraine who will ever listen to Moscow’s pleas ever again.

Moreover, the EU’s “Conclusion” includes “The European Union reconfirms its objective to further strengthen the political association and economic integration with Georgia and the Republic of Moldova. We confirm our aim to sign the Association Agreements, including the Deep and Comprehensive Free Trade Areas, which we initialed in Vilnius last November, no later than June 2014.”

Georgia and Moldova were also part of the U.S.S.R., and they are part of what Putin believes should be Russia’s sphere of influence. Not only did he fail to get Ukraine into his customs union, he has given Moldova and Georgia further reason to join the EU and has given the EU more reason to accept them.

Putin is now faced with only one option if he wants Ukraine in his camp — armed force. And as the Soviets learned in Afghanistan, conquest isn’t hard. Controlling your conquests is another matter entirely.

I don’t particularly like to apply the concept of winning and losing in global politics because it suggests a zero-sum game; my training and experience tell me that it rarely, if ever, comes to that. What I do believe in is measuring the success of a policy based on whether or not you achieve your objectives. Putin didn’t achieve his objective; it wasn’t even close. You can use whatever word you want to describe that, but the word “success” doesn’t fit.