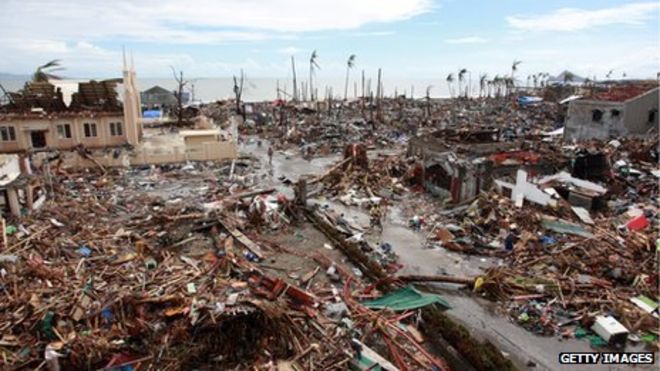 One of the most powerful typhoons ever recorded ripped through the Philippines on Friday. Typhoon Haiyan is thought to have sustained 190mph strength winds carving a path through the middle of the country and leaving a trail of destruction, the full extent of which is only now being realized as rescue workers begin the process of combing through the remains looking for survivors.

Widespread looting and panic has compounded the problem for emergency workers whose jobs have been made incrementally more difficult as they are tasked with tending to the sick and wounded while also trying to restore and maintain order in heavily populated areas.

Philippines President Benigno S. Aquino III declared a “state of calamity” in some parts of the country. Philippines Social and Welfare Department has stated that more than 4.28 million people were affected by the storm.

As international aid has begun to pour into the Philippines, damage to the country’s infrastructure caused by the storm is making it difficult to move supplies to the ares where they are most needed.

Haiyan comes on the heels of another large-scale natural disaster. Damage in some places in the middle part of the country had already been decimated by a 7.2 magnitude earthquake just four weeks ago. As a result, the country is dealing with depleted emergency resources and funds, which would be used to help storm victims. Although it is early in the process, shortages are anticipated in many cases, and this may be a central factor that has contributed to widespread looting. Several officials have reported that grocery stores and other places selling food have been completely cleaned out.

Cellphones, Internet and telephone lines were all but knocked out in some places, wiping out all forms of communication in some of the most populous areas where the storm hit.

As rescue workers comb through the miles of rubble left behind in its wake, a clearer picture of the wide-scale damage and destruction is beginning to emerge.

At present, rescue efforts are being concentrated on the city of Tacloban. With a population of more than 220,000 people, reports on the ground seem to indicate that almost all of the homes in the city were either heavily damaged or destroyed by a storm surge that is rumored to have crested as high as 13 feet. Although the death toll in Tacloban is only in the hundreds at present, city officials believe the number could reach 10,000.

The Philippine Daily Inquirer reported that the mayor of Tacloban was found by rescue workers clinging to the roof of his home.

As crews seek to return power and open communication lines once more, reports have begun to trickle in that seem to indicate that fishing villages along the coast may have been the most badly damaged by the storm. In some cases, officials have speculated that many may have been completely wiped out.

As a clearer understanding of the desperation emerges, many countries have pledged their support. The United States has already released immediate relief funds, which will likely be compounded by several million dollars in the coming days.