Taking a play from the Nuremberg playbook, Russia has now banned transsexual people from driving.

Nothing good is coming out of Russia these days. The Russian economy, which is basically just one large oil exporter and that’s about it, is practically falling apart under the pressure of international sanctions and falling oil prices. The ruble is in a free fall.

So, in a classic Vladimir Putin response to this crisis, what do you do? Change the subject and blame someone for something. And this time, it’s his old favorite, the Russian LGBT community. TheBlot Magazine has reported on this before when the Russian Duma, or legislative assembly, approved a law that made it a crime to even discuss homosexuality. You may remember as a result of that law, a monument to late Apple founder Steve Jobs erected in St. Petersburg was dismantled after his successor, Tim Cook, came out as gay.

As they rarely do, things didn’t stop there.

Russia has now added transgendered and transexual people to the list of people to be denied driver’s licenses. According to Human Rights First, the law went into effect last Tuesday.

Why? According to Russian lawmakers, these people are mentally ill. And mentally ill people cause traffic accidents. And Russia has too many traffic accidents. “We have too many deaths on the road, and I believe toughening medical requirements for applicants is fully justified,” according to Alexander Kotov of the Russian Professional Drivers Union.

This law lumps transgender and transexual individuals in with gambling addicts, schizophrenics and drug addicts. And as Britain’s The Independent pointed out, this law could prevent trans people from seeking help, assistance and resources less they be deemed mentally ill and thus denied a license.

Laws such as these are often so deliberately ambiguous, leading to loose interpretation and even more so enforcement. And this one is no exception. The BBC reports that this list of mentally ill individuals includes those with sexual fetishes, such as exhibitionism and voyeurism. Well, ta da. I live in Washington, D.C., and if this abhorrent law was passed here, that little clause would basically prevent every gay man I know from securing a license to drive.

Of course, it’s not just about driving. It’s about further stigmatizing a group of people and limiting freedom. And Russia knows what it’s doing here. What’s attached to the ability and right to drive an automobile? The right to move around freely? The right to earn a living, to report to work, to transport yourself and others to and from all sorts of places that are attached to your livelihood. Again, Russia knows what it’s doing here.

Sadly, the worst may be yet to come. 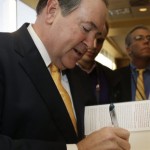