“I am a model, you know what I mean, and I do my little turn on the catwalk, yeah on the catwalk, yeah I shake my little tush on the catwalk.” These are the famous lyrics by the English band Right Said Fred, who took over the world’s pop scene back in 1992. We all love models, don’t we? Beautiful creatures who expose us to a life close to perfection. But then there are the group of “supermodels” who run the industry, and they believe that it is just not enough to be gorgeous, tall, skinny and rich. These supermodels also believe they possess the ability to sing.

I never really understood why every once in a while an established supermodel decides to take a chance and dive into a musical career as if it were as easy as walking down a runway. Neither career is that simple. However, at least for a music career, you need to have talent, or at least a gimmick. Who’s to blame? In 1976, Twiggy released “Here I Go Again.” In 1977, Grace Jones started her music career with the release of “Portfolio.” Her cover of “La Vie En Rose” is superb, but Grace is not only a singer with a unique voice; she is a performer who takes us on a marvelous journey every time. She succeeded because her stage presence and sound are so strong that we totally forget that she’s a model. Some of her colleagues just don’t have that. Can we have a RuPaul moment here? These supermodels should only do their thing on the runway.

In recent years our beautiful goddesses of the modeling business have tried to cross over to the music industry, or sometimes just to broaden their horizons. After all, in some parts of the world we are free to do what we want, even if it’s to make bad decisions. The results can be amusing, and at times embarrassing; Heidi Klum gave us “Wonderland,” and apparently that wasn’t satisfactory, because she also presented us with “Wedding Day,” a duet with her former husband, Seal. Tyra Banks did shake all the existing music off her body with “Shake Ya Body;” Naomi Campbell unleashed “Love and Tears” from her “Baby Woman” album (1995); and Carla Bruni is not having much luck with her career, as she has been forced to cancel her North American tour due to low ticket sales. My favorite singing-model moment was Kate Moss’s cameo during Peter Doherty and his band BabyShambles’ performance of “La Belle et la Bête” when they were a couple. Kate was just being a model, looking gorgeous and supporting her beau, nothing more. This list could go on and on since there are plenty of other offenders, like Karen Elson, Irina Lazareanu and Milla Jovovich — they all experimented with their respective musical genes. I should also point out that Vanessa Paradis started her career as a singer and not the other way around, as most people believe.

The last supermodel I’ll include on this list is the ultra-gorgeous and super successful Brazilian model Gisele Bündchen, who is “back” again, singing to promote H&M’s new swimming suit collection. In the commercial, she covers Blondie’s 1978 hit “Heart of Glass.” (The first time around Gisele covered The Kinks’ 1964 song “All Day and All of the Night.”) I know the money goes to charity and I applaud Gisele for daring to sing on camera, because I can only sing in the shower, but was it really necessary? I would love to know what Debbie Harry or Ray Davies would say about Gisele’s performances.

In the movie “Working Girl” (1988), there is a scene where the character Cyn, played by actress Joan Cusack, teaches us all about singing and life: “Sometimes I sing and dance around the house in my underwear. Doesn’t make me Madonna. Never will.” 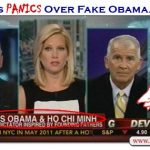 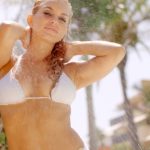