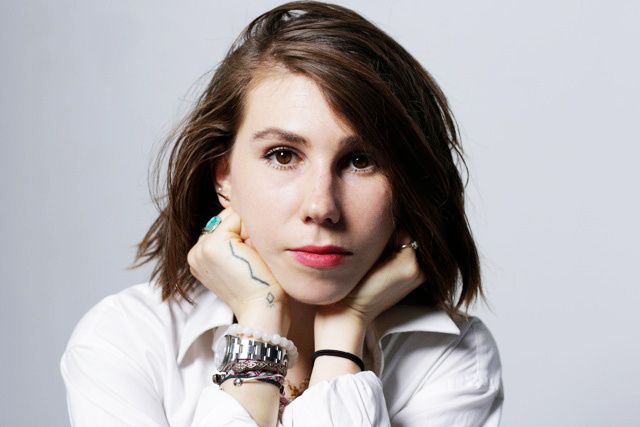 Picture this: it’s a frigid Wednesday night in Brooklyn. It’s February. A couple of girls are sitting in the back of a bar, engaging with each other, but mostly their phones, mostly with Tinder. It’s 2014 and going to bars full of people means nothing unless you ignore all the flesh-and-blood, tangible Homo sapiens around you in favor of the people on your phone who meet a specific set of parameters that you’ve chosen beforehand, just like all the cool kids are doing.

One of the girls is just swiping away. She’s not new to this Tinder game, and it’s a bleak game that she finds perverse pleasure in because it’s winter and she has nothing better to do, because apparently hibernation isn’t a viable option for human beings. After swiping left on creeper after creeper, and also accidentally swiping left on some hot guy she could have sworn she saw on the street one time, she comes upon this little ditty:

This girl — this Tinder veteran, if you will — finds this a bit jarring. A jumble of words spill from her mouth, phrases like “What, even?” and “Shoshanna, one-time crackhead, of all people?” and “Girl, bye.” You see, as a straight woman searching for straight men, she’s a bit confused why Zosia Mamet was appearing among a bevy of straight, albeit mostly super creepy, dudes, fulfilling herself as a supposed tell-it-to-me-straight bestie that nobody asked for. Zosia did, in fact, fall within the girl’s desired age bracket, but since Zosia didn’t fall within her desired genital bracket, our Tinder veteran is forced to assess the situation. What’s a girl to do?

“Maybe, just maybe, Tinder is not the best place to bring up my flaws, should said flaws even exist,” our unwilling protagonist thinks to herself. “I woke up like dis!” She’s right — and not just because she’s me, but also because bringing up someone’s flaws while they’re in the dark corner of a bar, perusing a dating site, is literally the last thing anybody needs. It’s like, clearly I’m aware of my flaws, I’m in a figurative and literal dark place, I’m creeping on creepers — do I really need Zosia Mamet to dig me further into this hole?

To be fair, I’m automatically defensive and reading this as, “Hey ladies — feeling terrible about yourselves? Let Zosia Mamet help!” And it’s like, girl I don’t know Zosia Mamet. She claims to be a Tinder lover, but she already has a boyfriend, so… I assume she’s using Tinder as a place to find friends, which is a terrible idea. And it’s like, Zosia, trust me: you do not want to be my friend. I am the worst. Or, you know, perhaps she’s just playing Hot or Not like the rest of us. Either way, I don’t trust her. You clearly don’t use Tinder, Zosia, and if you did you certainly wouldn’t be raving about it as a way to get us mere mortals to read your Glamour column. The magazine is specifically trying to target women, and there’s clearly a better way than clinging on to Tinder ladies’ supposed desperation. Do better, Tinder! You have enough buzz where you shouldn’t have to be resorting to such chicanery.

The last time Tinder dipped their toes in this murky integrated marketing water wasn’t as bad. Their recent collaboration with “The Mindy Project” basically looked like you were judging any other ol’ Brooklynite, unless, of course, you knew who Mindy Kaling or Chris Messina were. There were delightful little pictures, names and ages — and even fake bios to get you to swipe right. After a bit of one-sided witty banter, they’d end the message with, “Hey, also, come check out The Mindy Project on FOX!” which probably wasn’t the best way to end it, but you know, I digress.

At least that’s part of “Mindy’s” whole thing. “The Mindy Project” is basically a field guide for dating dangerously — or at least, dating casually. Not only that, but the collaboration between “Mindy” and Tinder wasn’t considered advertising, but maybe that’s because a.) Tinder doesn’t actually know what the phrase “strategic partnership” means, and b.) the extent of the collaboration was Mindy casually dropping a reference to the app in an episode where she also talked about her boyfriend getting up in her guts. Those were literal words that came out of Mindy Lahiri’s mouth. Who can remember anything said about Tinder when in the same breath somebody drops the phrase “like, UTI-level getting up in them guts?” Nobody, that’s who.

The point is, I don’t like feeling weirdly manipulated by an online dating app that’s supposed to be quick, fun and creepy. If you’re going to manipulate me, Tinder, I would like very much if you were more subtle about it. Figure it out, dudes, because Rachael Clemmons is not the one for this chicanery.