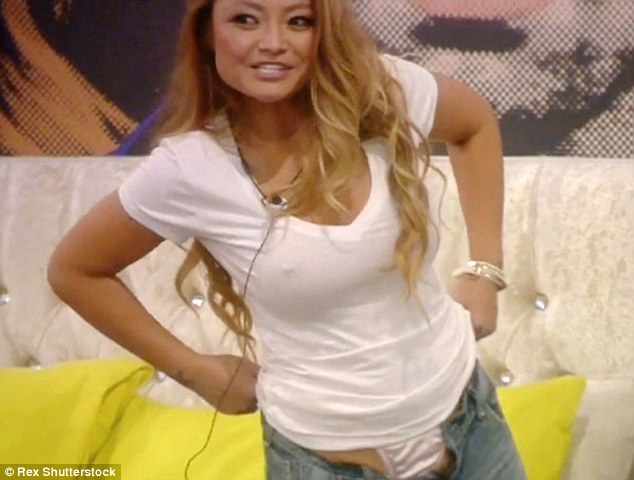 Is Tila Tequila about to drop her pants again? My first question, seriously, is “Who the hell is Tila Tequila?” A new drink?

After a quick Internet scan, I quickly began patting myself on the back for not knowing who the person was. I felt myself instantly highbrow. And I have this year’s “Real Housewives” Christmas ornament.

So, yes, I googled Miss Tequila, and my first thought was, “Oh, those look real.” Beyond that, it seems she has embraced Nazism and some pretty insensitive things about Paul Walker (surprise, he was ritualistically murdered). For someone who will apparently say anything for another bite at the fame apple, let’s all take a minute to be shocked.

Miss Tequila, in a Facebook post that has since been taken down, wishes to be known as “Hitila,” a combo of her name and a “certain historical leader who was not too keen on the Jews.” Lovely.

About Hitler, who she apparently thinks is soooo cool now, Miss Tequila took to her blog (again, watch out, she blogs) with a piece called “Why I Sympathize With Hitler Part 1: True History Unveiled.” Oh goodie, there could be several installments. Read it here, if you can.

In the piece, Miss Tequila writes that her main goal is to tell “Hitler’s side of the story.” Hate to break it to her, but I think historians have pretty much nailed down his side at this point. No matter, she tells us:

“I, just like you, used to view Hitler as an atrocious monster! How could such EVIL exist in this world? As a matter of fact I even made a youtube video a while back showing sympathy for the prisoners of war during WW2 so you cannot say that I am a racist nor anti-semite. I was merely brainwashed just like all of you have been.”

How did she become brainwashed? Well, the media of course:

“When I woke up to the truth in this world filled with lies, and dug a little deeper into the true stories behind what really happened during WWII it just brought me to tears. It brought me to tears because here was a so called “MONSTER” that I used to hate. Why? Because the media told me to hate him.”

I, for one, would really appreciate if the media would let me make up my own mind on history’s greatest monster.

I apologize if any of this is offensive. Take comfort by scrolling through her drivel and finding the comment section attached to her piece.

“Wow you are more fucked up in the head than I thought.”