There was wall-to-wall people, some just ordinary, everyday fans hoping to catch a glimpse of their favorite comic-book artists or whatever star or cast that might be signing at any particular point of the day. Then there are the diehards, the ones decked out in full anime, superhero or TV or movie character attire, happily posing for picture after picture as they navigate the packed aisles of the main floor of the sold-out Jacob K. Javits Convention Center in New York.

One can almost get whiplash trying to take it all in, and that’s kind of the best part, just seeing all there is to see because there is a lot to see. And then you happen to walk past a well-known actor, director or artist making their own rounds of the convention floor. TheBlot Magazine spied legendary artist, toy designer and creator of “Spawn,” Todd McFarlane, cosplay celebrity Jessica Nigri — and we maybe stalked director/podcaster/comic-book lover Kevin Smith to get the fantastic photo you’ll see below.

In other words, we had a damn good jam-packed day at New York Comic Con. Be sure to check out our photos from Saturday at the Con, too!

Nikki M. Mascali is the editor of TheBlot Magazine. Her favorite superhero is Captain America, in case you want to know. On Friday at NYCC, she interviewed Des Doyle and Ryan Patrick McGuffey, director and producer, respectively, of the documentary film “Showrunners,” which will have its U.S. premiere Oct. 31, as well as Matthew Senreich, Breckin Meyer and John Harvatine IV of Adult Swim’s “Robot Chicken.” Be sure to check back for those stories soon.

Tom Roarty is a contributing journalist and photographer for TheBlot. His favorite superhero is Hellboy, and on Monday, he will just so happen to have a recap of Ron Perlman’s book event at the Union Square Barnes & Noble on Wednesday, Oct. 8. Perlman played the title character in both of Guillermo del Toro’s “Hellboy” movies. 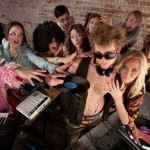